I laid awake for hours, well enough time to hear everyone else stirring in the early hours and Kashi making his way up the stairs for his first round of door-knocking wake-up calls. Once the call is made you have half an hour to get up, dressed and packed before heading down for breakfast. Your bags must be fully packed and left outside the bedroom doors as the porters collect these as you eat breakfast and head up the mountain before you. 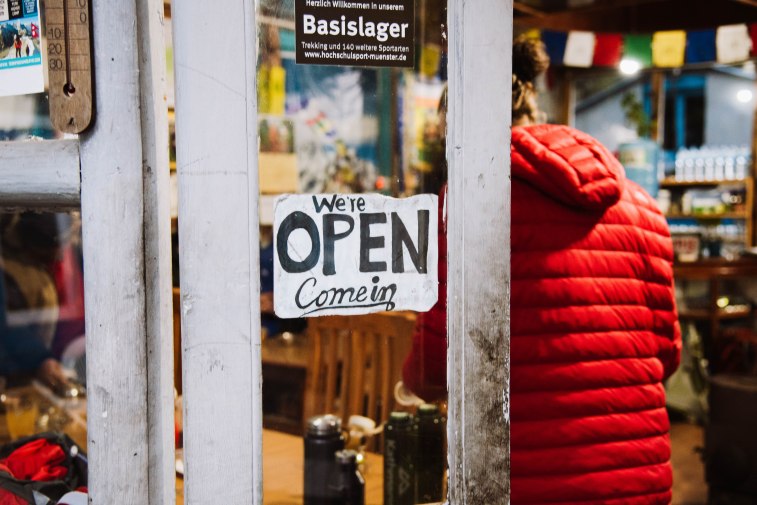 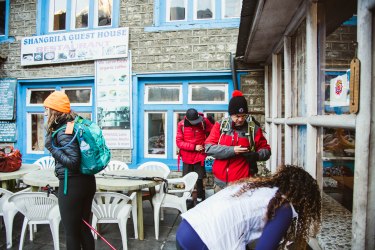 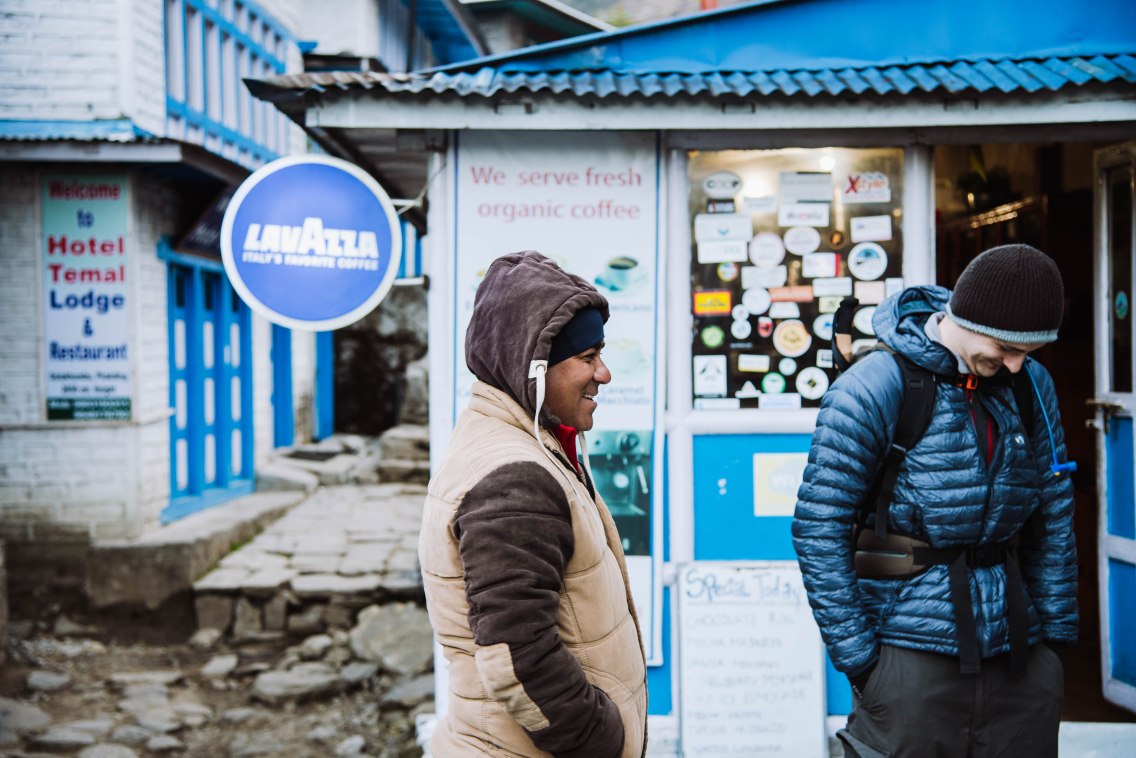 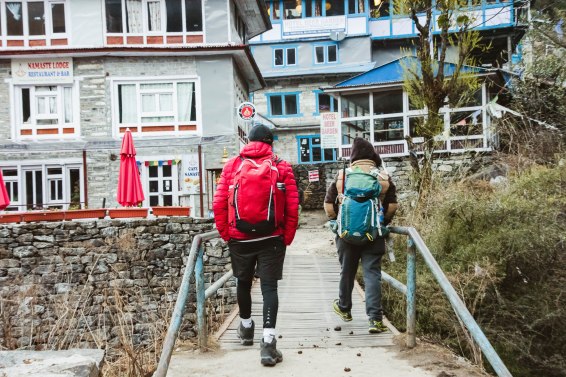 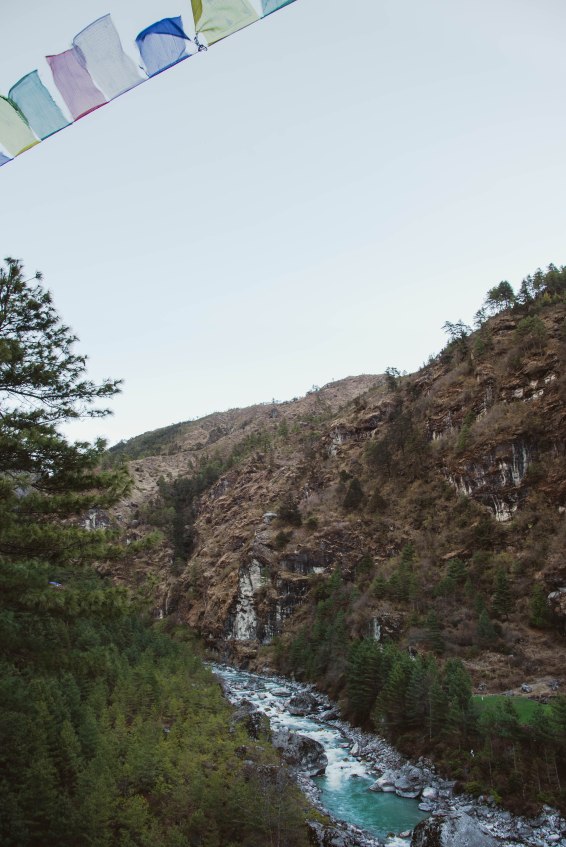 I underestimated how cold it would be in Phakding, being the first night and the first village from Lukla I thought it would be reasonable, it was cold. So cold that I got up in the night to put an extra layer on but I didn’t care, I was sleeping in the Himalayas and it was only a sign of things to come. I don’t know if it was nerves or excitement that got me out of bed so quick but I was up, packed and ready before Robbie had even rolled out of his sleeping bag. Due to being stuck in Kathmandu for the days previous our group had experienced some excellent bonding time and excited chatter could be heard throughout the corridors of the tea house. 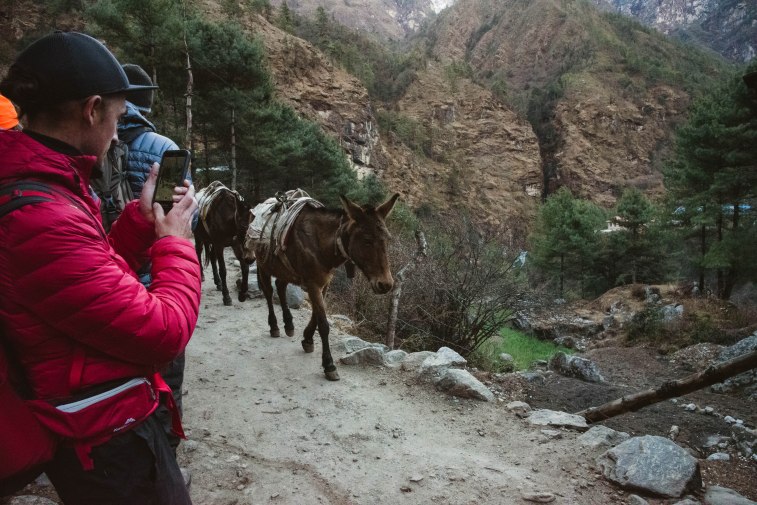 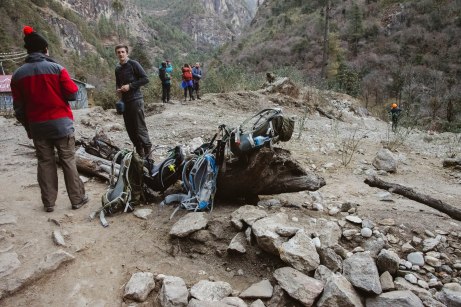 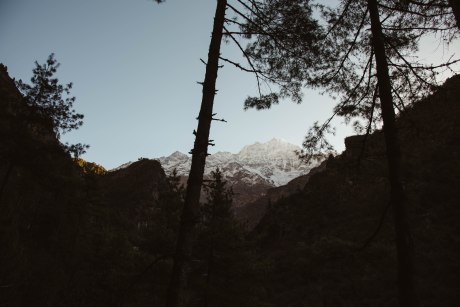 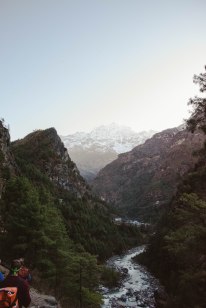 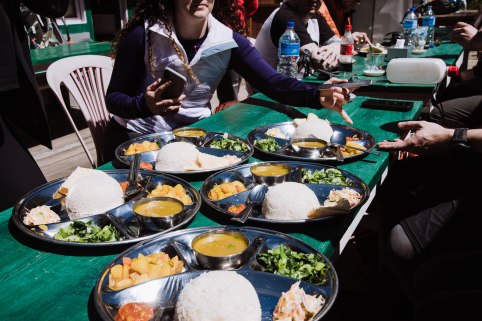 Breakfast consisted of eggs, bread, cinnamon porridge and lemon, ginger tea. I wolfed it down like I wasn’t going to see food again for the rest of the day and finished getting ready. Slowly the group came as one and we set off on our first official day hiking in the Himalayas. Our destination was to be Namche Bazaar, for just one night, as again our delayed departure meant we missed an acclimatization day in the bustling market town of Namche. Before setting off on this adventure I purposefully limited my research of the route. I had barely looked at any images of the trek as I wanted to experience everything first hand. I had no idea what to expect, Robbie was lucky enough to do Annapurna base camp a few years ago so he had a small idea, I was going in blind. Setting off from Phakding with El Chapo in tow, our newly adopted trail doggo, who unfortunately didn’t last long due to the dogs in other villages chasing him away. We crossed bridges and passes and forests. We walked alongside rivers and streams, in and out of the morning sunshine for hours. The first mule train also appeared very early into our day and I was beside myself with excitement.

We were all finding our feet with pace and group dynamic. Kashi did an excellent job of setting a slow and steady pace upfront while the lead guide Shankar brought up the rear. The pace is a lot slower than I expected and rest stops were aplenty, perfect as you never felt in a rush, even though we were a few days behind schedule. We stopped at tea houses and riverside cafes for hot tea and snacks, we played with the local dogs and took off our packs for a moment of rest. Every now and again we would catch a glimpse of our porter crew lead by the sweetest young boy, Deepack. 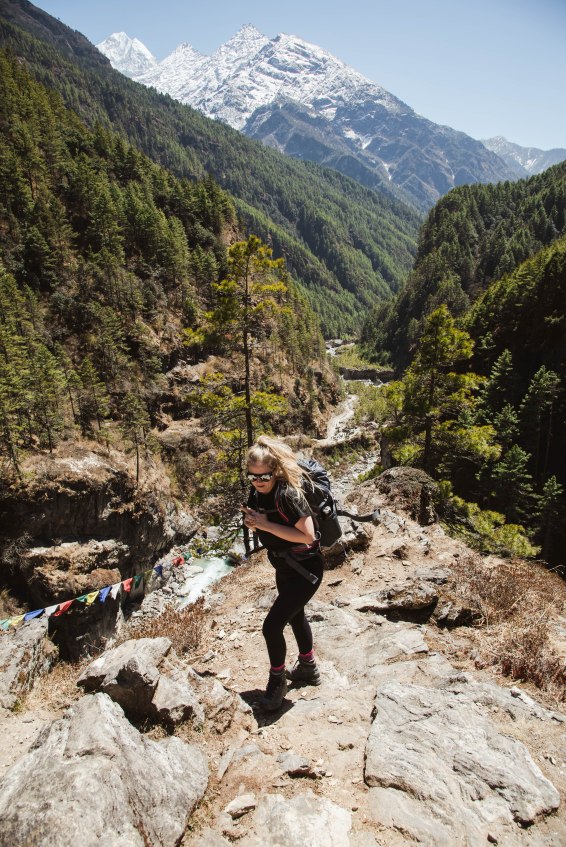 The first few hours on the trail weaved through towns and tree-lined pathways and it wasn’t long before we reach the famous two-layered swing bridge, famously erected by Sir Edmund Hilary himself.

This is where the hard yards kicked in. Before embarking on the trek I thought every day would be a constant incline, it’s not. They famously call some parts of the route, the Nepali flat, a little bit up, a little bit down, a little bit flat. However, mixed into your day may be uphill. Here was our first taster of that. We walked steadily uphill through the forest for around 3 to 4 hours, we had plenty of breaks and the slight breeze was welcoming. I didn’t believe for a second that I would be walking in a t-shirt and slapping on suncream during our hike.

On route, Robbie filled Shankar in about his Annapurna adventure, also with G Adventures, his guide 6 years ago was called Maski… Shankar stopped us and laughed hysterically, apparently right now, Maski was en route down to Lukla and our paths should cross in the next hour or so. Shanks decided not to tell Maksi and see if he recognized Robbie. About an hour later down came another big group with Maski bringing up the rear, Shankar shook his hand and we stood by. The biggest “I KNOW YOU” came out of Maski’s mouth, it took about two minutes for him to realise where from and the boys had the shortest but sweetest catch up this side of the Himalayas. 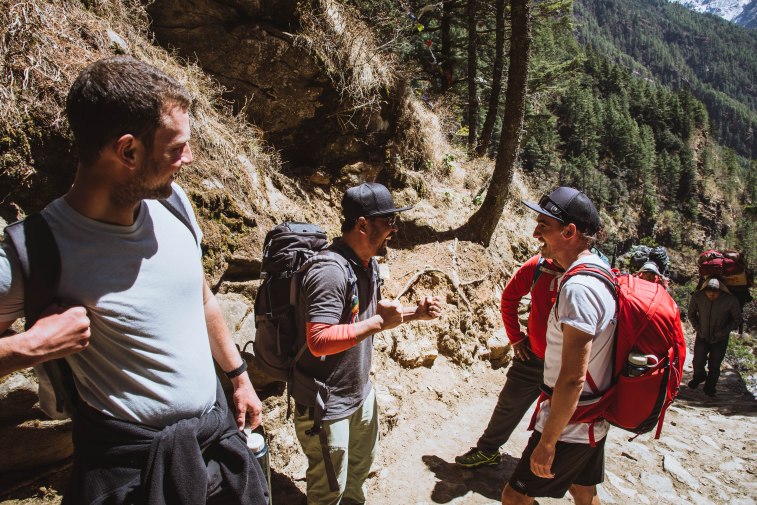 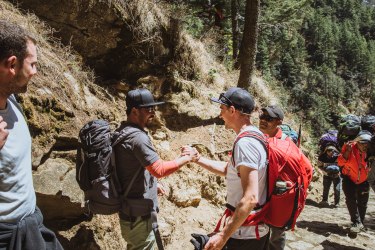 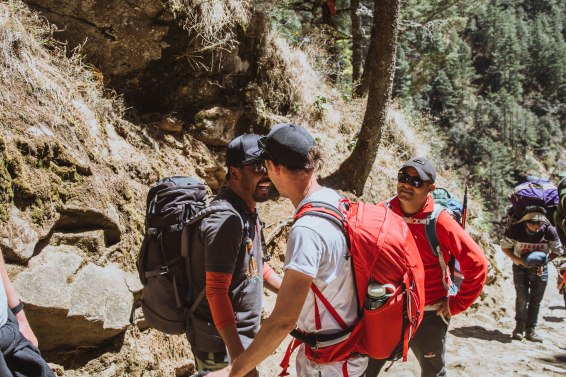 Due to our little rendezvous, we had lost the rest of our group so continued with Shanks alone. He stopped us and took us off the track, we bush bashed through to a little clearing and there she was, my first ever sighting of Mount Everest, perfectly framed by the tree’s and standing proud against the bring blue sky. If you know me at all you will know I am an emotional wreck, so here I am crying, trying to take a photo and thanking Shakar for showing her to me a few days earlier than expected.

We soon caught up with our group with an extra spring in my step and ready for the rest of the afternoon. The uphill slog was hard but worth it. Just before 3 pm, we reached Namche Bazaar, the idyllic market town set into the hills. Due to our delayed entry to the trek, we had to shave a few days off the trek, one being the acclimatisation day in Namche. Knowing that we dumped our bags in the tea house and went out exploring until Sunset. We wandered the market stalls and hand-picked items to collect on our way back through. 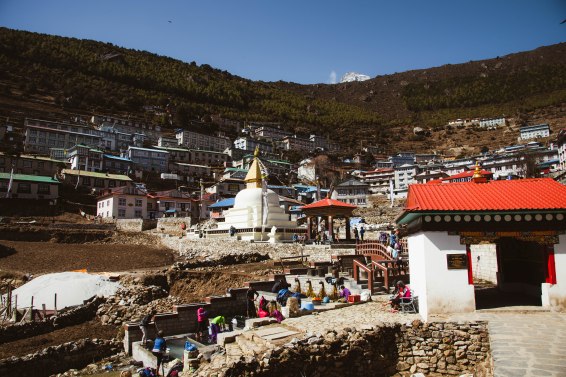 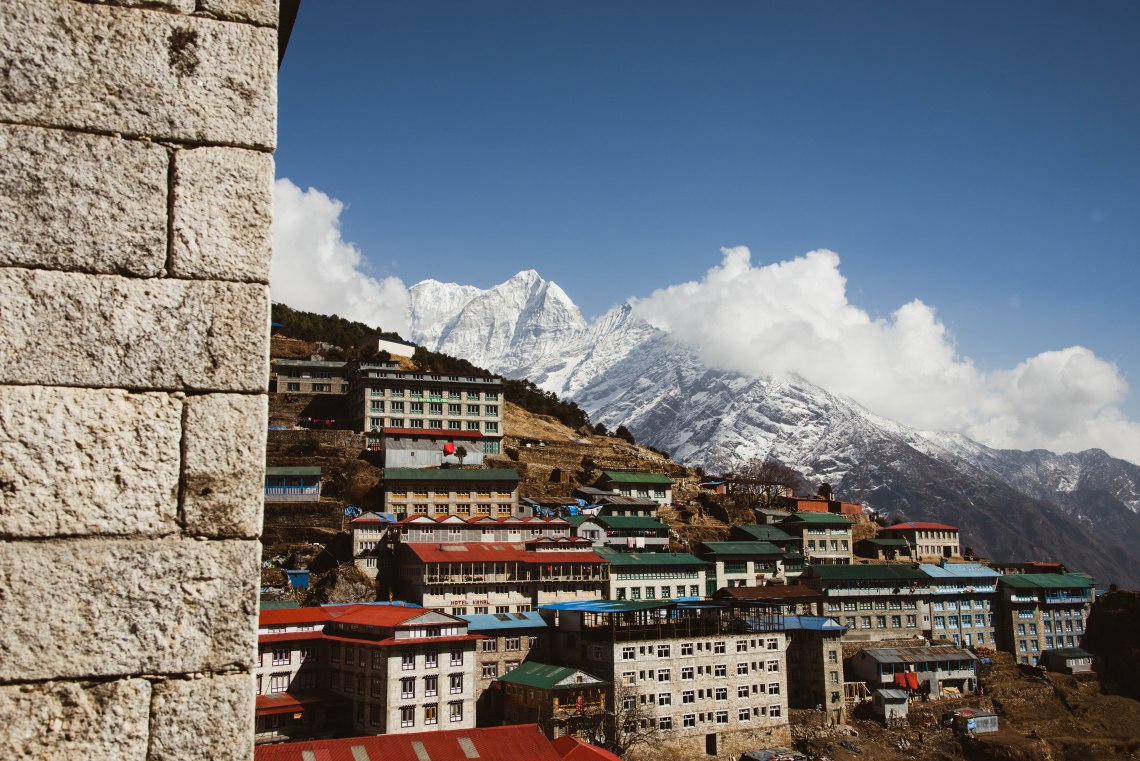 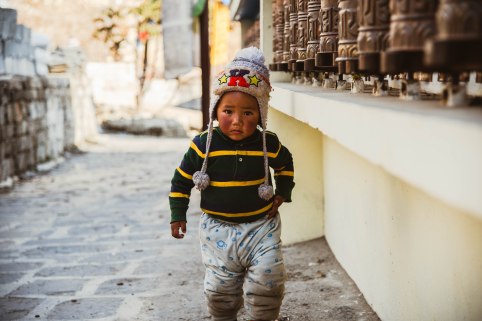 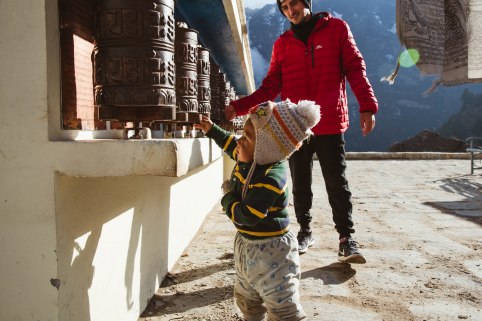 We found children playing with the prayer wheels and watched them run free around the village. Before retreating for dinner and bed, we found the rest of our group in the Irish Bar – apparently the highest in the world. Dinner consisted of momo’s, potato and veg with a side of garlic soup. I was half expecting another night in the artic freezer however the rooms were a little warmer up here, and with an added luxury of an en suite bathroom! 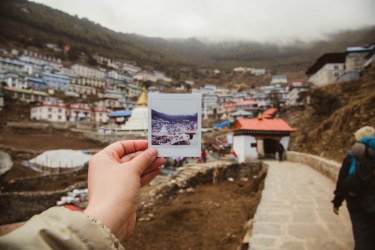 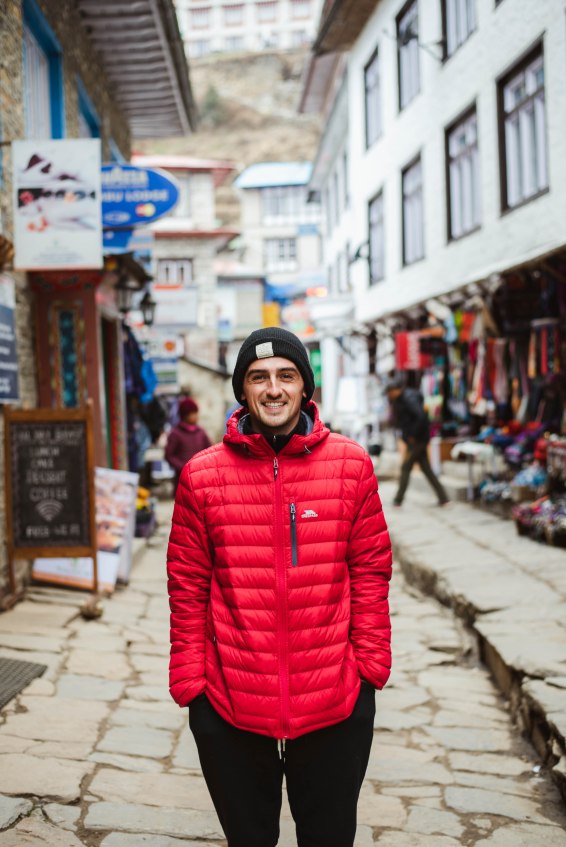 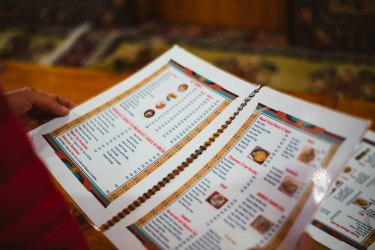 The night slipped away from us and we bunked down, ready for another amazing day tomorrow.

One thought on “Everest Base Camp Day 4”