So I experienced my first night bus from Hanoi complete with pushy rude people trying to get on first, well more fool you because you filled up from the front which resulted in us getting three seats together at the back, equivalent to the size of double bed,winner! Gloating around until we got comfy, Mr Sleepy was kicking out the Z’s before we even left Hanoi and didn’t wake until seven hours later when we reached Sapa. I on the other hand for the first time in my life couldn’t sleep, I was drifting in and out experiencing every single bump on the road. 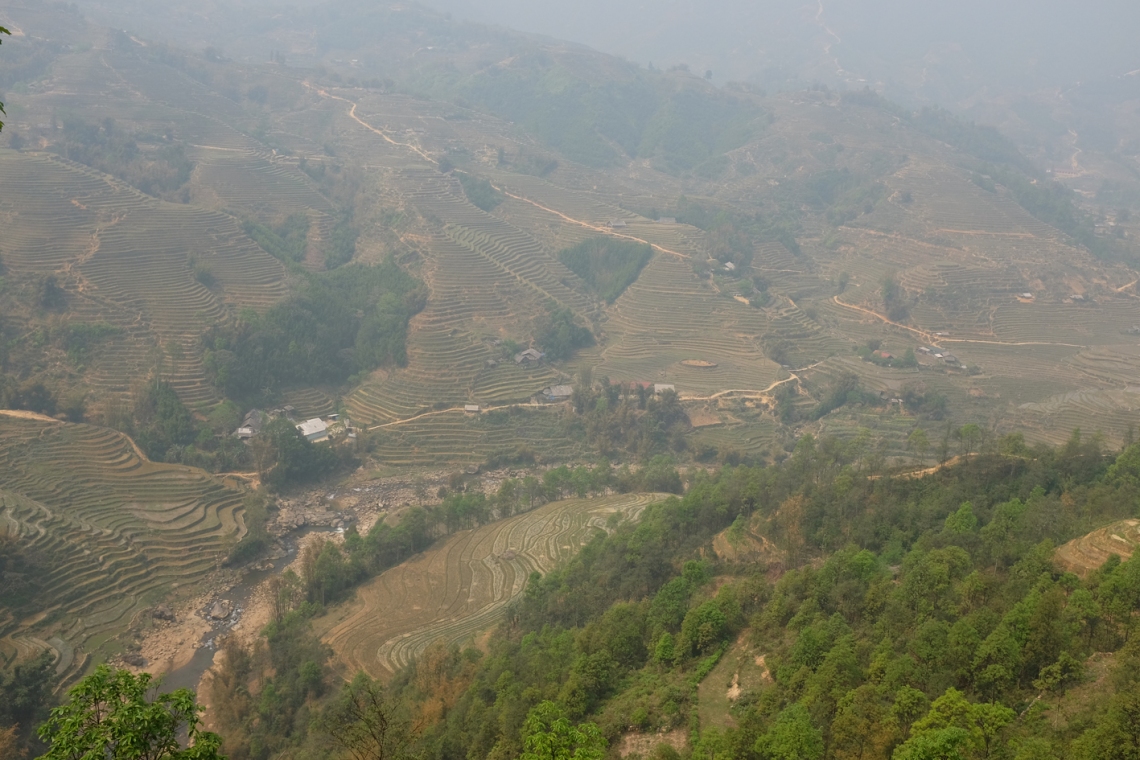 By morning we had reached Sapa, a little town percheded on a steep slope overlooking valleys of rice terraces overshadowed by beautiful mountains. We were quickly hustled into a taxi, with these kind of tours you have a feeling no one actually knows whats going on, you’re just a name on a piece of paper and you point when you see it. The taxi sped through the streets and arrived at the Grand View Sapa hotel, looking up we thought oh god we’ve booked into some huge hotel and a walk around the town for the next few days. There was nothing grand about the view either, the whole town was covered in a low hanging grey mist, we couldn’t see a thing.  In we went for a egg and bread breakfast and awaited our fate, not to sound dramatic but we literally had no idea what was going on. Into the restaurant came a young Vietnamese girl dressed in traditional village attire; black woven coat with colourful stitching and matching long black socks tied below the knee. Her name was Na.

She told us to pack a small day bag with overnight clothes and meet her at the front desk. Turns out we had booked the best tour in the town, an 18km trek through the rice paddies and villages and a home stay with one of the village families, now I was excited and stood eagerly at the front, packed and ready to go. We went in a mini bus down the mountain, the driving is no better on the mountains, swinging its way round corners and through the town down small roads and on the edge of the cliff I feared for my life. Its better to just close your eyes and pretend its not happening and then take your next breath when the bus stops. 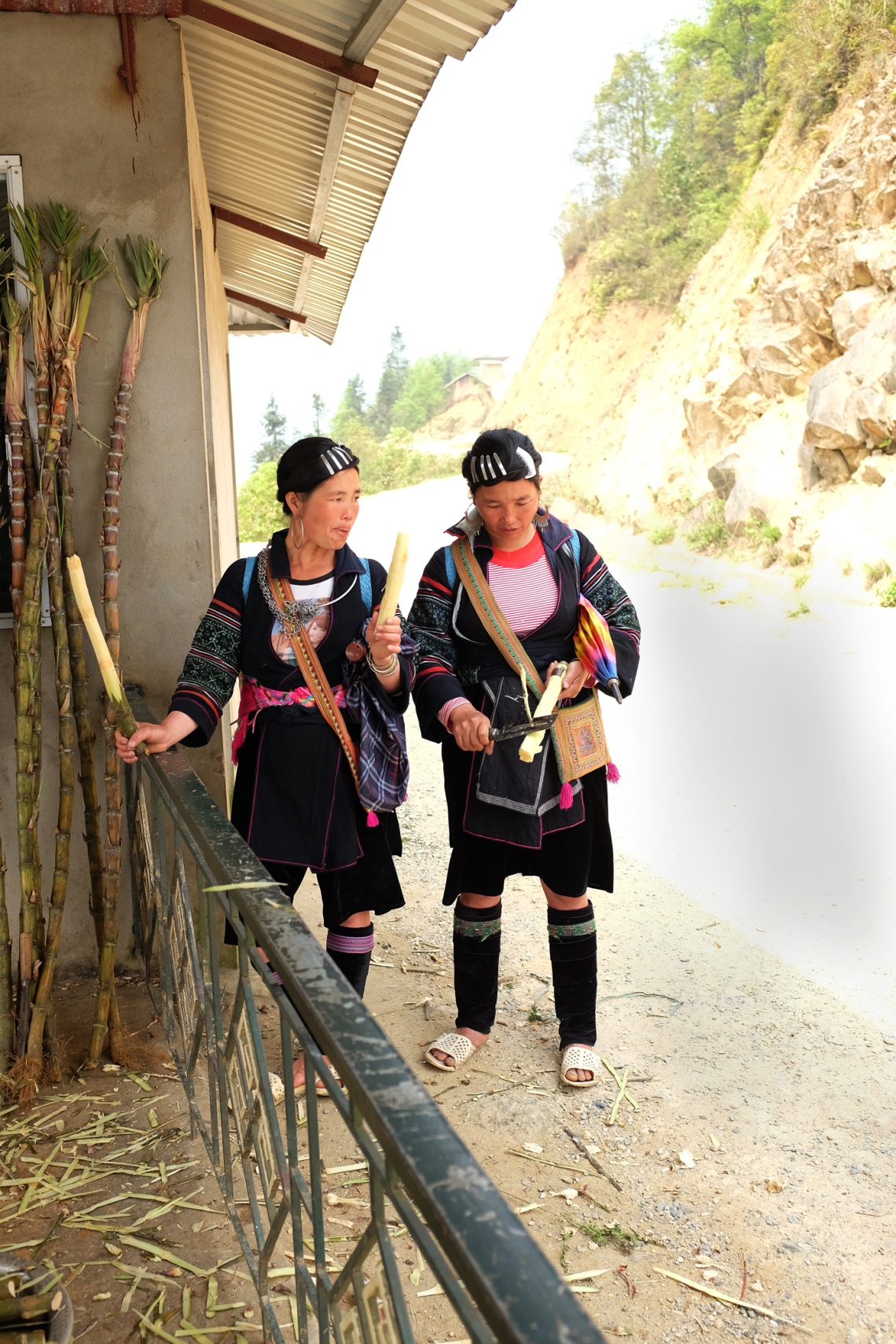 Out of the mini bus and back on my own two feet I felt safe. Our guide told us that we would be walking 12km to the villages and eventually the home stay that day through the rice paddies. The scenery was just incredible, the early morning fog had started to lift and it slowly started to show off the beautiful mountains and miles of pure greenery. The sun was shining and it was breathtaking. We had a little following of five older ladies and four kids that were from the villages, they walked next to you and asked you questions in the little English they knew and to my delight helped me walk the unsteady harder bits of the trek. We both found out on the trek that I am unsteady, uncoordinated, unbalanced and useless just to add. I have never found it so difficult to do something i have been doing from a young age, walk, just walk Sophie like the rest of the group instead of slipping and sliding around at the back. But it’s fine I like tackling things alone anyway.

The ladies that had now become somewhat a support system for me were making handicrafts on the way down and when we sat for lunch it was their time to get them all out in the hope that you bought something, unfortunately you couldn’t just look at one persons as then they all came over for a sale so I sadly declined them all as I didn’t think it was fair if I gave money to one and not the others when I believe that they all work together to make the goods. When you sit down for lunch you don’t know when you’re going to eat again or how far you’ve got to walk so we ate until we were fit to burst, rice, chicken, pork, veg, spring rolls and watermelon. Then off for more trekking to another village where our guide went to school. Here all children have to go to school until they are 17 and if their families have more money they go on to further education in the main town, it humbled me knowing that all the kids go to school and get chance for education. Our guide told us that when her family didn’t have much money she used to live further up in the mountains and walk two hours to get to school in the morning and two hours back at night. Na talked to us all day, telling us that she learnt English just from speaking to tourists and it was perfect.

She didn’t want us to miss out on anything and as some of the group were only on a day tour she took us off the normal route and higher into the rice paddies to a place where she had never taken a group before. The view from up here was breathtaking, the rice paddies all falling into each other down the hill and the villages at the bottom it was just so peaceful and beautiful. After another hour of balancing on the edges (the white bits) of the rice paddies and stopping to take pictures of everything I could, we reached a small town. Weaving through all the houses and up some pretty steep paths, chickens and children running everywhere we reached the family home stay, a quaint house with a huge courtyard and some pet water Buffalos. The host family came out to say hello and gave us tea, the lady only looked young and three kids were running around, one strapped tightly to her back, we later learned they were all hers. Na told us we had some free time before dinner so we went back down the hill and into the village, we found a local bar, joined by the lovely German girls from our group we sat and chatted for ages until it was time to see what delicious food the family were cooking… and what a feed they produced from a room that had two small fire pits in the middle and a sink for washing up. 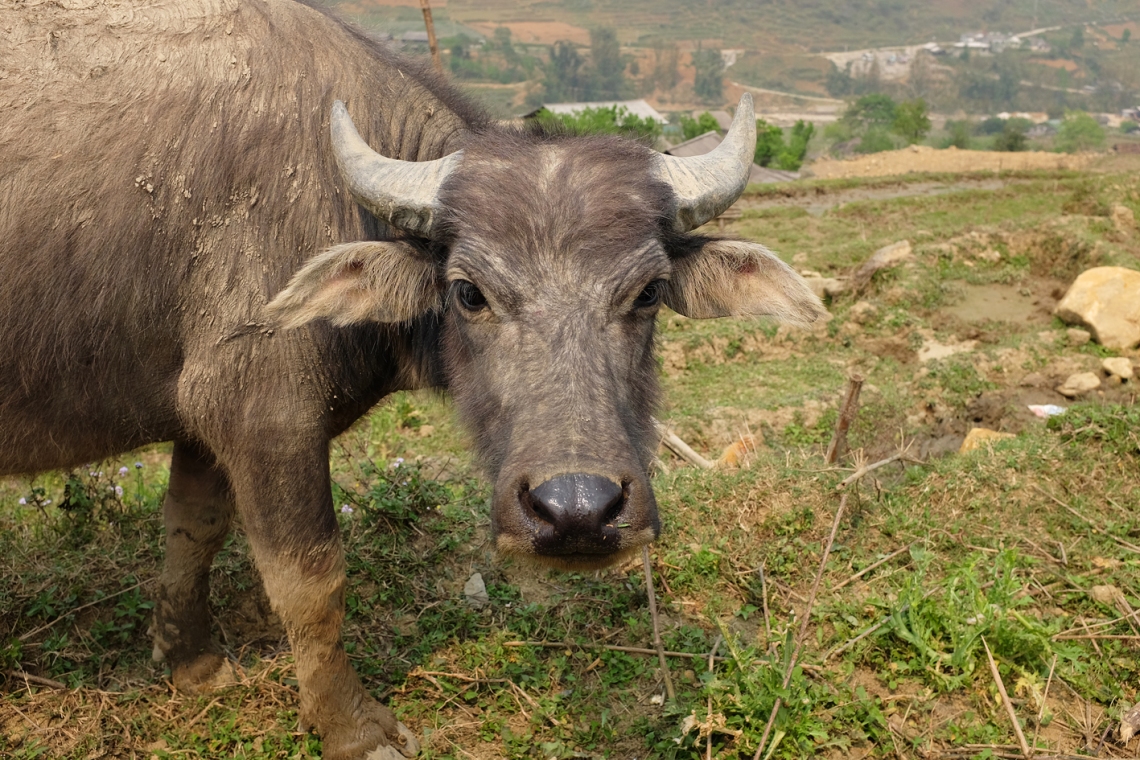 The food is pretty similar everywhere, rice, meat, veg but so so tasty, accompanied with the foulest home brewed rice wine we retired to bed early, ready for another day hiking.  Bed was a huge wooden platform with single mattresses laid out, big colourful blankets and a mosquito net. We bunked up in one and fell asleep under a thick cosy blanket, which was defiantly needed, Sapa gets a bit chilly at night! The next morning we were up and ready so early I don’t even think the family were awake yet. So we went on a hunt for coffee, to which we found nothing but Japanese tourists staring at us. Back up to the house and we had the biggest stack of pancakes, honey, banana, sugar and as mug of coffee, perfect. For some reason today I was super unsteady on my feet, was I the only person to fall over in the group, yes, multiple times, yes, was I also the only person to submerge both my feet in two different muddy puddles, much to Robbie’s delight and video skills.

After stopping again for a lunch we opted for another hours trekking higher into the mountain and back down to the village school to get picked up. Loading everything onto my packhorse boyfriend and making him go first down every hill or path as I proceeded to slide down on my bum or ungracefully slip, slide and end up in Robbie’s arms, useful for many things is Robbie and being my human barrier and saving my life was paramount today. We arrived back at the Grand View hotel after another death defying mini bus ride, it was raining and cold. We were very lucky on our trek, it was beautiful sunshine everyday.

Killing time before our night bus we showered in the courtesy hotel room. It was so creepy, I am so happy I wasn’t alone as the door had no handle and a huge hole where the lock had been taken off. We wedged the door shut with a set of draws and had the quickest showers known to man. When walking round the town one of the village girls remembered me from the hills after promising to purchase things from her I had to run away from her as she was so relentless and would not leave me alone. We sat with everyone left from our trek and had a lovely dinner, drinks and chat about life before having to board the night bus/night club back to Hanoi, this one equipped with bright neon’s which may I add don’t get turned off at all throughout the night. We managed to somehow blag the bed at the back again. As we had arranged a trip to Halong bay leaving four hours after we got to Hanoi I was determined to get some good kip. This time I managed it which then made trying to find the hostel in the maze of Hanoi’s old quarter at 4am a lot more bearable. Welcomed with a warm shower and unlimited tea, coffee and breakfast we were in surprisingly good spirits ready for our next destination. 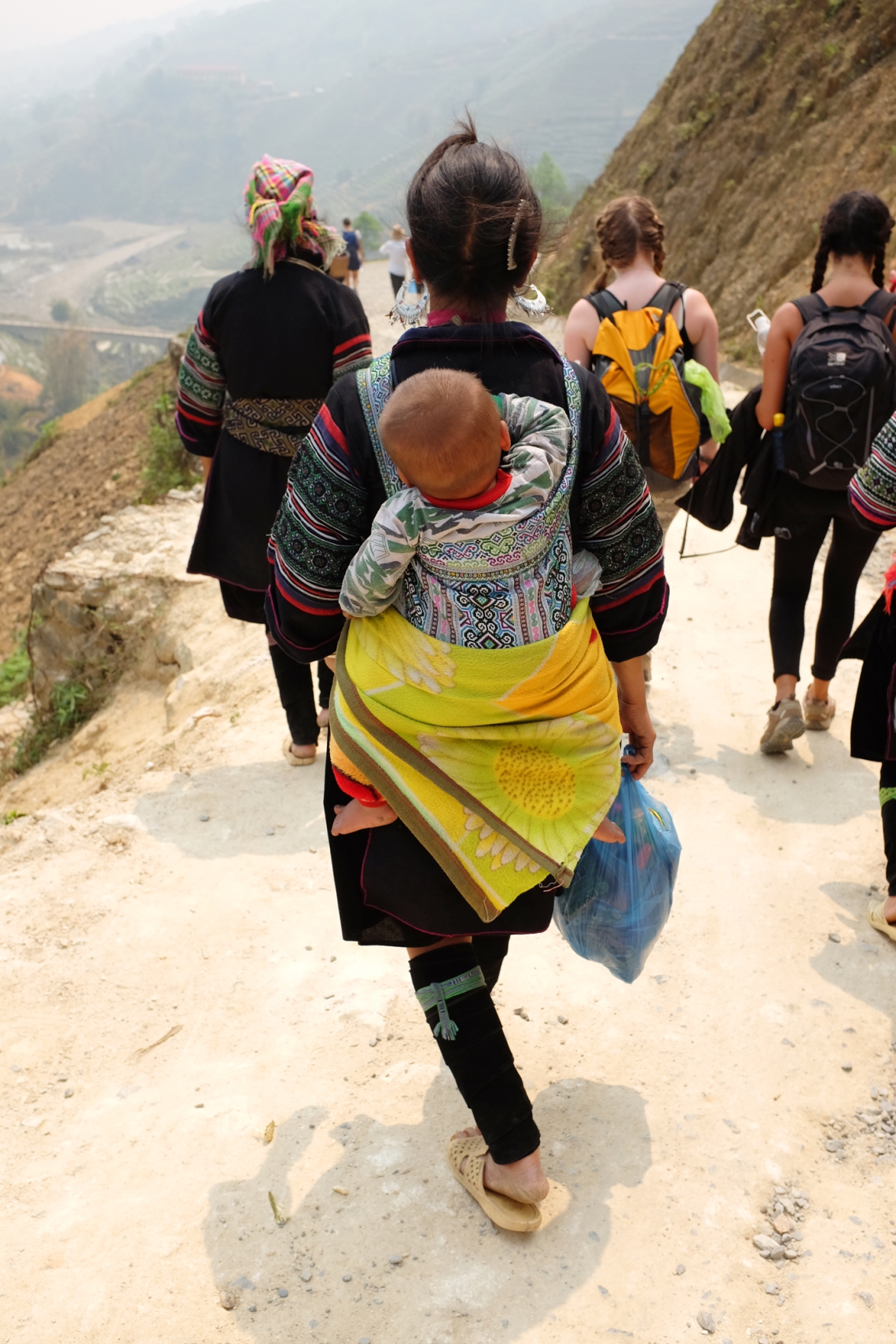