So after waiting four hours in the hotel reception, drinking copious amounts of tea with condensed milk, which sounds gross but is so delicious we were bundled onto another mini bus heading east for Halong city, the gateway for Halong bay. From the harbour we would catch a boat to sail around the bay for two days. Before we went to Vietnam we watched Charlie Boreman ‘By any means’ A travel documentary where he travels from Dublin to Sydney on different modes of transport… his stint through Vietnam got us both ridiculously excited and me especially for Halong bay as not only have I never been to Asia but I have always dreamed of seeing the huge rock formations that are in the water. He also visited a pearl farm and after finding out one of the boats stops there I was super excited for this tour.

Halong Bays 3000 or more beautiful islands rise up from the waters of the Gulf of Tonkin and make the landscape so amazing. Even though the weather was slightly dull it was mysteriously beautiful. The mini bus ride to the bay was again horrific and I spent most of the time with my eyes shut trying to sleep or holding on for dear life witnessing every near fatal collision with the hundreds of moped riders. When we reached the bay our very young, inexperienced yet hilarious guide told us to follow him but he ran off through the crowd so fast we were all stood in a bit of a huddle staring at each other and wondering what the hell was going on. He obviously realised that five minuets into his tour he had lost everyone and came running back through the crowds ushering us onto a long wooden boat insisting we all wear the life jackets provided. I wasn’t taking any chances after the way these people drive cars, god knows what they are like driving boats. The harbour was full of big wooden ‘junks’ most of them painted white with red sails on the top. There was a few dodgy looking ones and I was happy when our water taxi went round these and finally stopped at our boat. We were given some time to get our stuff into the room, a lovely little wooden cabin with a window by the bed so we could look out over the bay. In true Vietnamese style we were welcomed with huge buffet style lunch, which was very much appreciated after only eating toast at about 7 hours ago.

Our guide was really young and super nervous, repeating himself constantly and smiling awkwardly in my direction because I looked like the only person paying him much attention. The boat set sail into the harbour and we were given an itinerary for the next few days, today we were going to see some caves and the islands with the best viewpoints, a cooking class and then a night of fun filled karaoke (my absolute worse nightmare and thankfully this didn’t happen) then the pearl farms and a kayak around the bay tomorrow. We set off for the caves as did every other boat in the world it seemed, I’m not one for super busy places, let alone stuck underground surrounded by people so we hung around at the back and entertained ourselves while the rest of the tour group listened intently to the stories of how rocks miraculously look like dragons and frogs (Vietnamese handiwork if you ask us) after this we went to one of the islands that had a beach and 200 steps to a pagoda which had wonderful views. We climbed to the top and then chilled out on the beach while our guy frantically ran around checking everyone was still on the island, I mean honestly there was no where else to go. As we were admiring the view from the beach and wondering what was going to happen tonight on the boat with the organised fun karaoke we were accosted by a Japanese family, they physically pulled us up from where we were standing laughing and stroking our arms, apparently its okay to just grab random white people to be in your family photo, we posed with them, I smiled and Robbie with the most un-amused look and physical stance just stood there while they laughed and jostled us around, then they were off walking down the beach waving at us as if we were new best friends. It was all very strange. 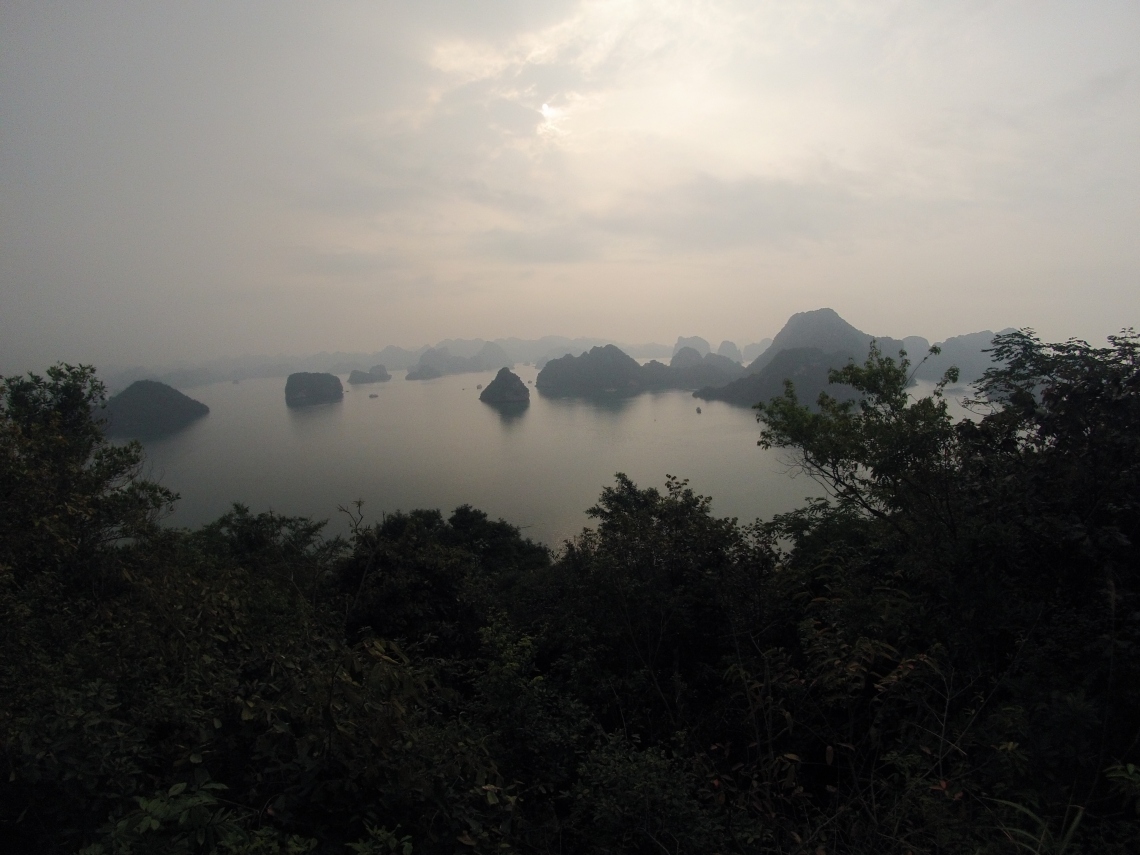 We saw a familiar face from Sapa in the crowd, Johan from Sapa emerged from behind a group of boys and I think he was equally happy to see us and gutted he couldn’t be on our boat, as we were pretty much doing the same route down the country we told him hopefully we would see him again some place else. Back to strapping myself in my life jacket and having a wonderful time on the little wooden boats that were whizzing us around, we were off kayaking for the afternoon. I’m not very steady on my feet and something about stepping into a boat that someone is only keeping still with their foot nerves me.. I had a vision of me doing some kind of splits movement between the kayak and the deck, but Robbie assured me id be okay and had the GoPro ready you know just in case. Off we went splashing around, our guide warned us not to go to far, so we did a huge loop right out of sight around the islands, I know were crazy. The sun was starting to set as we were paddling around and it was so beautiful, as we were determined to be the last ones back we soaked up the amazing views around us and I had a moment of immense clarity, I was sat here with my wonderful boyfriend, with the most amazing views and having the best time.

We joined the rest of the returning kayaks and back to our home for the night. We finished off watching the sunset with a beer on the top deck. Our guide had arranged a cooking class. I was excited, as this is one thing I has wanted to do while in Vietnam so I was super happy we were doing one on the boat… even though it only turned out we were making spring rolls, I got stuck straight in producing the worst, fattest uneven spring rolls to a point where I hoped they ended up on the other peoples table at dinner. I had fun and made Robbie join in too, obviously he produced some perfect looking rolls! The food again was incredible and to my delight my spring rolls had made it nowhere near our feed. We were sat with an ex traffic cop from London who was filling us I on all his stories from the UK and his daughters which was lovely. There was also a Brazilian guy who by the sound of it smoked 175 cigs a day and a bottle of whiskey but it turned out he was hilariously funny and an extremely well travelled gent who graced us with his travel adventures and humour. It was pretty obvious that the kill joys on our boats didn’t want to drink or do the karaoke (to my delight) so they lowered the price of the beer in the hope to sell more we took full advantage of this and bought bottles to sit up on the deck and listen to the other boats killing the Spice Girls and Justin Bieber.

All the boats were lit up and the moon was reflecting off the water it was all very romantic and lovely until the crew took it in turns to sleep on the sun lounger opposite us. We were told specifically to be up at 6.30am for the sunrise and breakfast at 7am I got up at 6am so I could get ready and on the deck for the sunrise however the sun had already risen, our guide had got confused and just laughed at us when I told him the sun was already up. Anyway we were off to the pearl farm and I was so excited. The boat pulled around loads of nets that were all set out in grids in the bay and we got off and onto the farm, there was so much information about pearls  and how they are made I was taking it all in. I know that a natural pearl is formed by a bit of sand getting into an oyster and then the oyster then naturally manufactures this into a pearl by coating it over years and years. On a pearl farm however, because the world is in high demand for jewellery they place a small white calcium ball inside the oyster, then string these to the nets and place them back in the water, allowing them to naturally complete the process. The longer a pearl is left the bigger it gets and we were looking at all the different grids, some were only a year old, 18 months and some are left for up to four years. Round on the deck there was a huge pile of smashed open oysters and four Vietnamese farmers opening the shells and flicking out the pearls which had successfully grown into a huge pile, the colours were so beautiful and it was such a surreal process.

We went into the shop as I had heard that you could buy a small imperfect pearl for around $10 so I was excited to turn that into something, by imperfect it means they aren’t perfectly round or the colours are a little different. However Robbie had already decided that for an early birthday present he would buy me a necklace so I left with the most beautiful single perfect pearl on a silver chain, I am a very lucky gal. Unfortunately our time at Halong bay was coming to an end and our after another seat gripping bus journey back to Hanoi we booked into the same hostel for one night while we decided where next on the map. Halong bay was so beautiful and I loved sailing around on the little boats and sleeping in a wooden cabin, it was a perfect relaxing little trip after our trek in Sapa and I would defiantly recommend going and witnessing the natural beauty of this place.