Leaving ‘home’ is always difficult but with the next destination being Queenstown I was so excited to pack my bags and get on that plane. Sydney well and truly served its purpose, it allowed me to meet Robbie, make wonderful friends and explore Australia while having somewhere to call home. Our last weekend in Sydney we spent drinking copious amounts of coffee, trips to Freshwater beach and beautiful food in our favourite cafe that serves the most incredible mexican food at night! We also completed the spit to Manly walk, something that we’ve been meaning to do the whole time we’ve been in Sydney. The coastal walk follows the harbour the whole way round and brings you out at the wharf bar where a much needed pint of cider was waiting for us. Then the dreading packing began, I have been for the past few weeks taking multiple bags to the charity shops and throwing bags of rubbish. Then it came to actually packing my bag, I panicked I took everything out of the wardrobe and pretty much had a meltdown, how and why do I have so many clothes, It was an absolute mountain but I managed it. I eventually managed to consolidate everything I own into a suitcase, a rucksack and a laptop bag that trust me was stuffed with much more than just a laptop. My bag was so heavy and pretty much bursting at the seams so god knows what will happen in Queenstown airport when it comes off the plane.

The night before we left the Nepalese family we had been living with for the past year cooked us a huge feed, so much food and drink and they even gave us presents which was ridiculously nice and so thoughtful. We posed for family album pics and had to say our goodbyes, but its only goodbye until we meet them again in Nepal as they have invited us to visit when they next go and stay with their family. We retired to our room for one last night, We sold pretty much all our furniture so a mattress on the floor surrounded by luggage was how we spent our last night. I had decorated the walls and everything in our first little home but it was all packed away ready for NZ. The taxi was picking us up at 5 AM! I couldn’t sleep through nerves and excitement and also the thought of maybe sleeping through the alarm and having a home alone style rush to the airport! We were fine though and made it safe and sound. My bag weighed 26KG!!!! I couldn’t believe it.. well I could I had stuffed everything in there and had to sit on it to close it, the woman behind the desk wasn’t so understanding we were moving our whole lives to another country and when she weighed my hand luggage I got a telling off for the 3KG over it was, when she asked if I had any other bags I lied straight out and then had to kick my laptop case all the way to the end under the other desks and run through the security to stop her charging me god knows what, naughty I know but I dread to think how much the whole library in my bag weighed.

After purchasing ridiculously overpriced airport food and coffee we were at the gate ready to board, still looking like I hadn’t checked any luggage in I made Robbie carry my laptop bag through for an even distribution of all my bags (I was still scared that they were going to charge me for being the crazy bag lady at the gate) on the plane and ready to go I was so so excited and ready for our next adventure. The flight into Queenstown is anything to get anybody excited, the views from the plane window were incredible, flying over the southern alps I was snap happy on my phone until we hit the worst turbulence ever! We literally left our seats as the plane bounced its way down on to the runway. I was waiting for my case to come out on the belt, we kept waiting and it just wasn’t coming out, Robbie had all his stuff and was ready to go, I was convinced they were just chucking the remains of my overly stuffed bag on the belt and we would be picking up all my clothes and underwear one at a time as it came out BUT finally my case came out, It was such a relief. 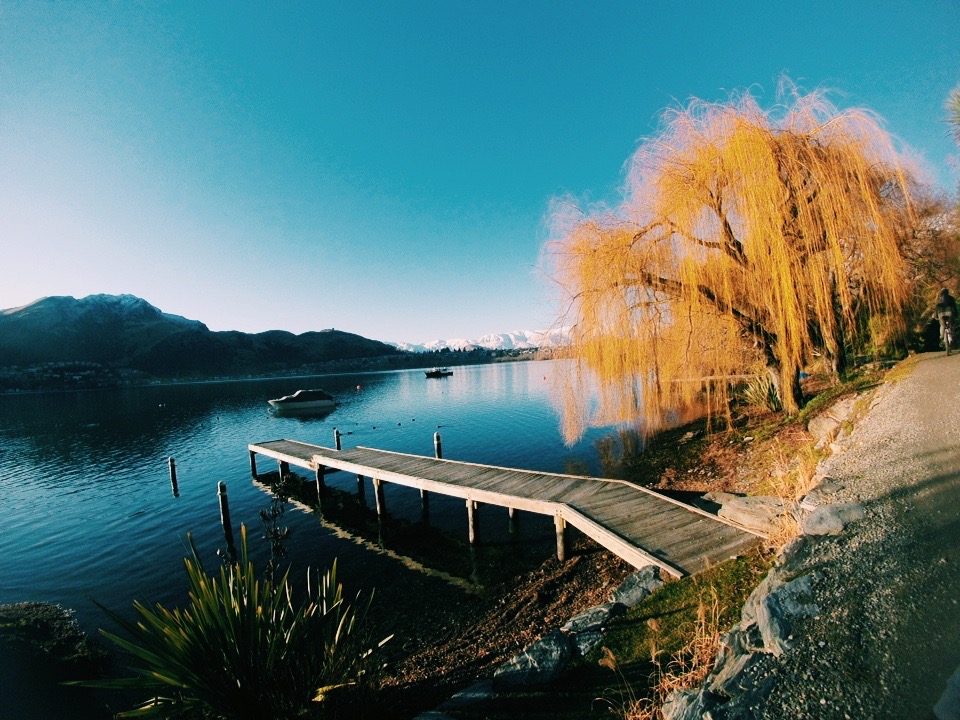 Now to find our accommodation, We had booked an Air BnB for a week pretty close to the airport in Frankton, The taxi drivers told us it would be a 5 min walk and to much to get a taxi so they pointed us in the direction of the house. I had screen shots of google maps on my phone but my navigational skills are terrible so naturally we ended up a ten minute walk away in the opposite direction. Eventually we found the house, empty yet open (something we are now getting used to, nobody locks their doors in Queenstown) we went inside to try and find a number or the internet so we could ring the owner as our Australian sims weren’t working. We got hold of a lovely lady called Trudy who told us to make ourselves at home as she was working. We went out and grabbed some dinner and drinks at the local as it was too late to cook anything and we were tired from all my misdirection. The house was beautiful, homely and had a wood burning fire which made life so much more bearable! We knew it would be cold here as its winter but jeez it was FREEZING!I am so happy I packed and bought extra jumpers and woolly hats! We decided we were going to have the weekend off and start looking for jobs and somewhere to live next week however Robbie saw two jobs online and applied for them both just on a whim, this was the first night in Queenstown and by the time we woke up Friday morning he had been offered both jobs and a start date- now to get him some tools and decide which one he wanted, he was on for a winner.

Friday we decided to walk into Queenstown which is about a 10km walk from Frankton but along the Queenstown trail which follows the lake all the way and right into the centre of town, a beautiful walk and views of the mountains and the lake, we had coffees and lunch, well when I say lunch we went to Fergburger, its a tiny little shop in the middle of town that always has queues out the door of hungry tourists and locals, there’s only one Fergburger in the whole world and its here, the guy who invented must be one happy chap! I’m going to be one of those really annoying people who tells you that you’ve never had a burger like it because you have actually never had a burger like it THEY ARE AMAZING, you could share one they are that huge and the menu is so confusing but I remember it from last time always being so busy which is was so you have to decide quick and then wait outside for your little bundle of heaven! Robbie declared its his mission to complete the menu by the time we leave!! I had already 100% fallen in love with this place and it already felt like home. We had heard that jobs and accommodation were pretty tight around this time of year so we decided to look for somewhere to live. We viewed some pretty crappy places that were just not up our street at all but we thought we were going to have to take as it was looking pretty slim in other places until we got a message from Imogen telling us she had a room but it wasn’t available for another three weeks, we decided to go and have a look anyway and as soon as we got to the house I was so in love with it. Its right on the lake, beautiful views of the mountains and two wonderful flatmates, Imogen from Brighton and her boyfriend Cam who is a kiwi! Its a modern three story house and we wanted it, As we were walking back to Trudy’s it was decision time.. If we didn’t get this room then we were going to road trip up to Auckland and start fresh there after enjoying the snow for a few weeks. Imogen text that night and we could move in in three weeks, Trudy said we could stay at hers in the mean time and Robbie started his new job on Monday! Everything is going swimmingly. 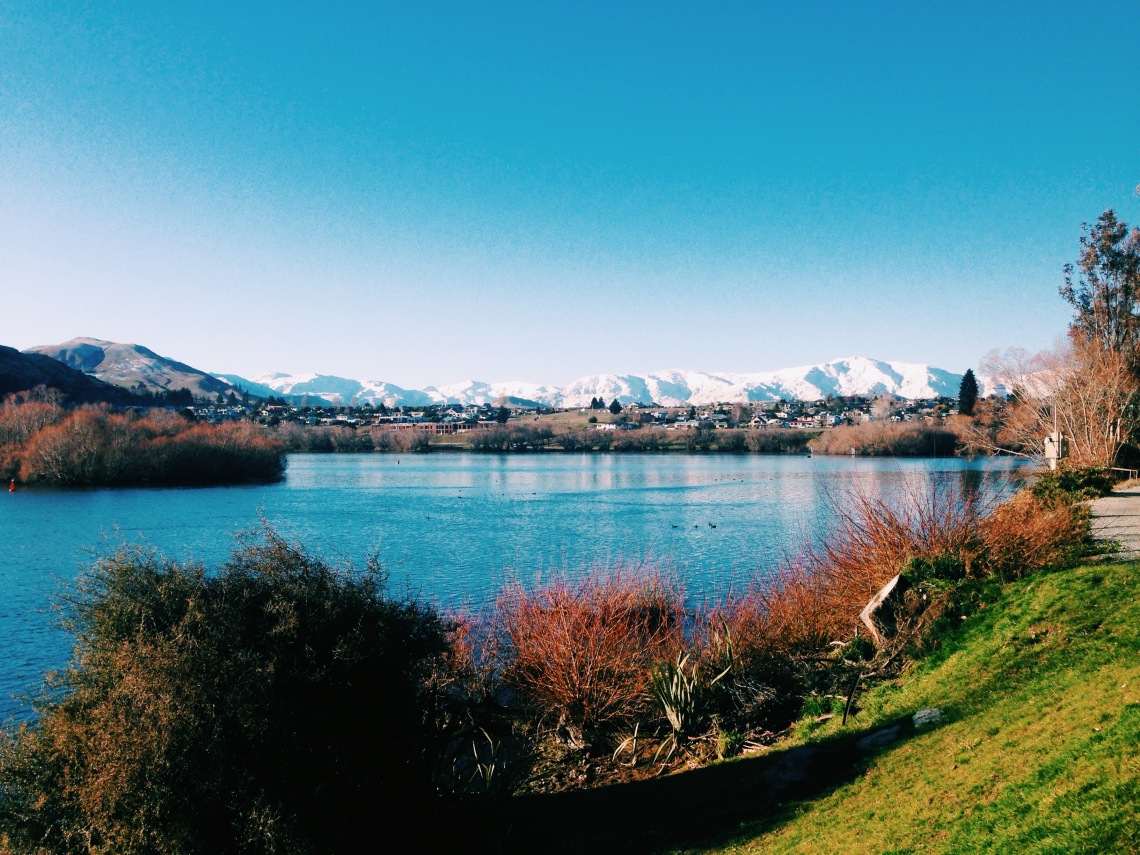 We bought a car, a Subaru legacy four wheel drive so that we could get up and down the mountain and we had snowboarding lessons booked for next weekend. I think I am the happiest I have ever been. One of the conditions of moving to the south island first was so that Robbie could learn to snowboard, I say just Robbie because I thought I would have one lesson, not be able to do it, hate it and give up but I was wrong and we both absolutely love it which resulted in us buying all new gear and the season pass for our favourite mountain- The Remarkables. We met a couple called Jenny and Connor while we were at the Air BnB from Newcastle, lovely lovely people who had come to the south island after living in the north to snowboard for the season, it worked perfect. We shared the driving up the mountain and Robbie had someone to whizz down the big runs with while I was still teaching myself not to fall over on the baby slopes.

I got a job in a cafe as a barista which suits me as its situated on an industrial estate so there’s no trade on the weekends so the owner closes WHAT!! A hospitality jobs where you get weekends off guaranteed!!! I was a happy camper! Unfortunately Robbies job didn’t turn out as good as he wanted to to so he quit and now works for a Stonemason in a beautiful little town called Arrowtown, he’s learning new trades and he says for once enjoying going to work everyday, I work at the cafe full time and the regulars and staff are lovely and we get the weekends to go up the mountain, explore Queenstown and spend time in our lovely little home. I am so happy that we moved here and started a new adventure. New Zealand is beautiful, everywhere you go, the landscape, the people and the lifestyle is just perfect. 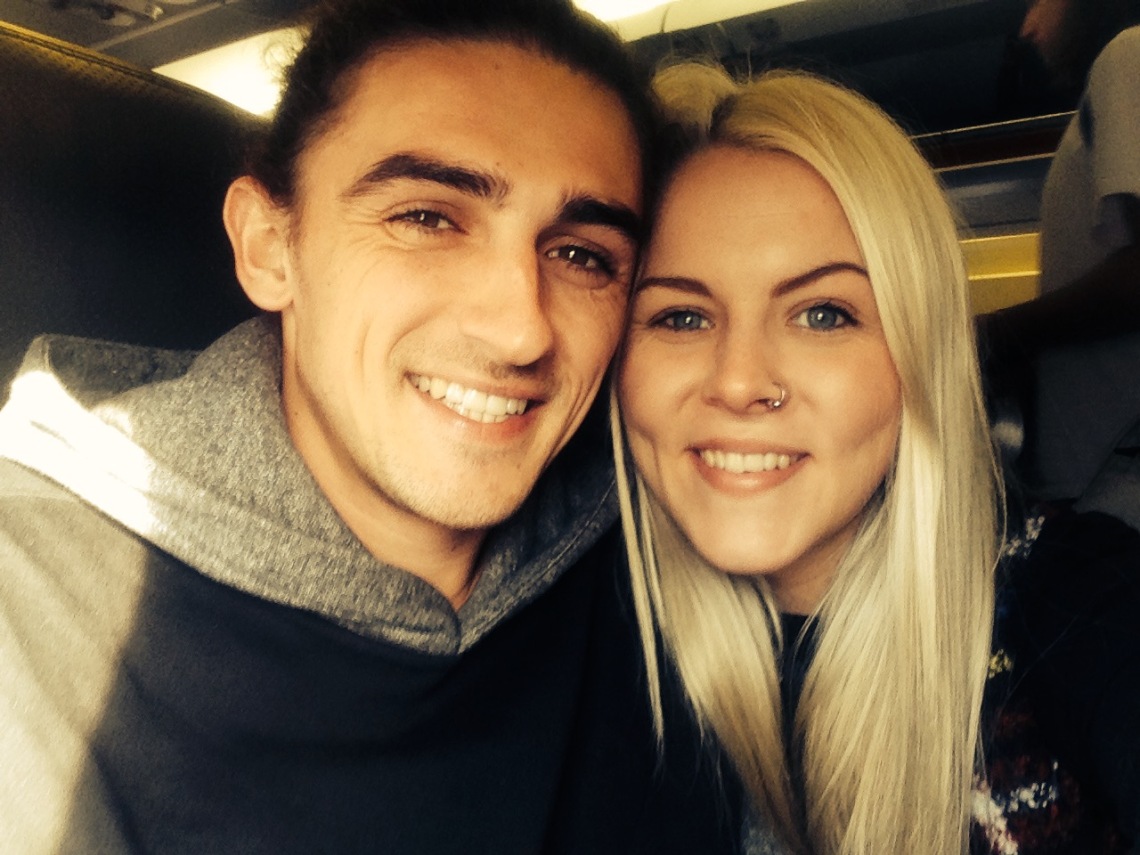 One thought on “From Sydney to The Shire”