To the Hill Country 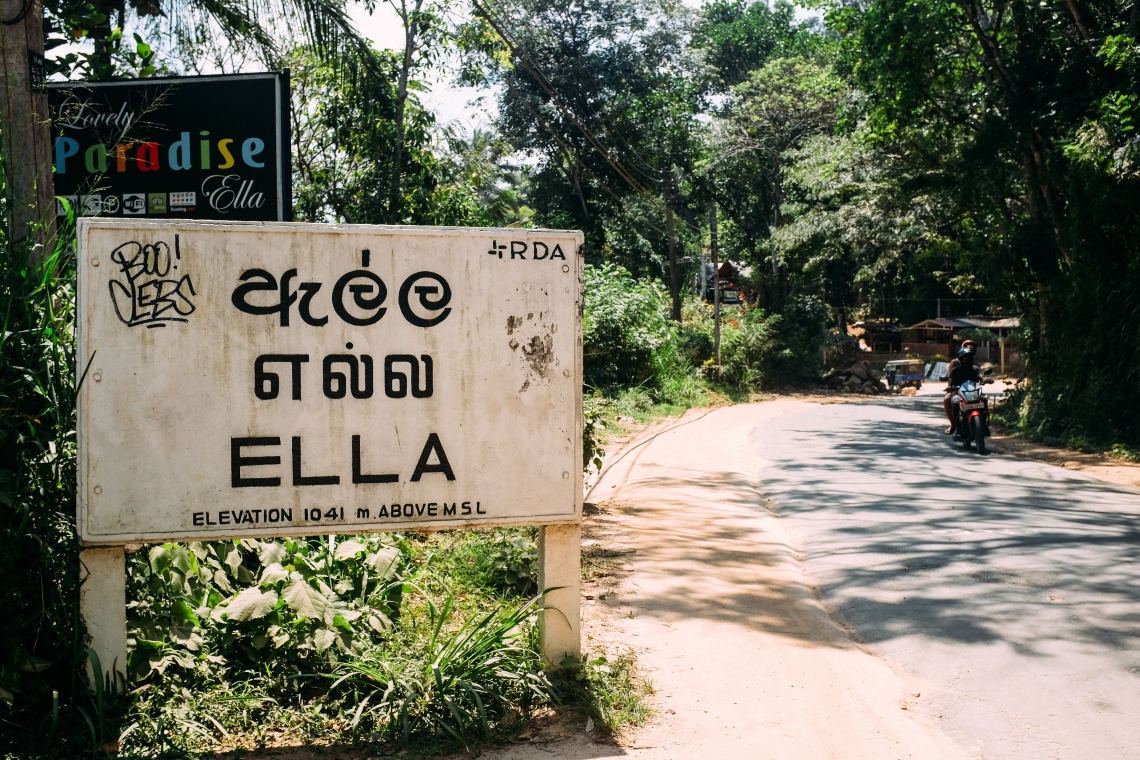 I don’t think anyone really wants to spend seven hours stood up, constantly being barged around by passing food vendors, fellow backpackers and pretty much the whole population of Sri Lanka in one train carriage. That is unless that someone is I, it was my birthday and I didn’t care for all those things that may have dampened my day. I was in Sri Lanka, on one of the most beautiful train journeys in the world heading to my most anticipated destination and birthday cake was on the horizon. I was happy! Granted it was hot and there were no seats but we were heading for Ella, the mysterious tea plantation town up in the hill country. 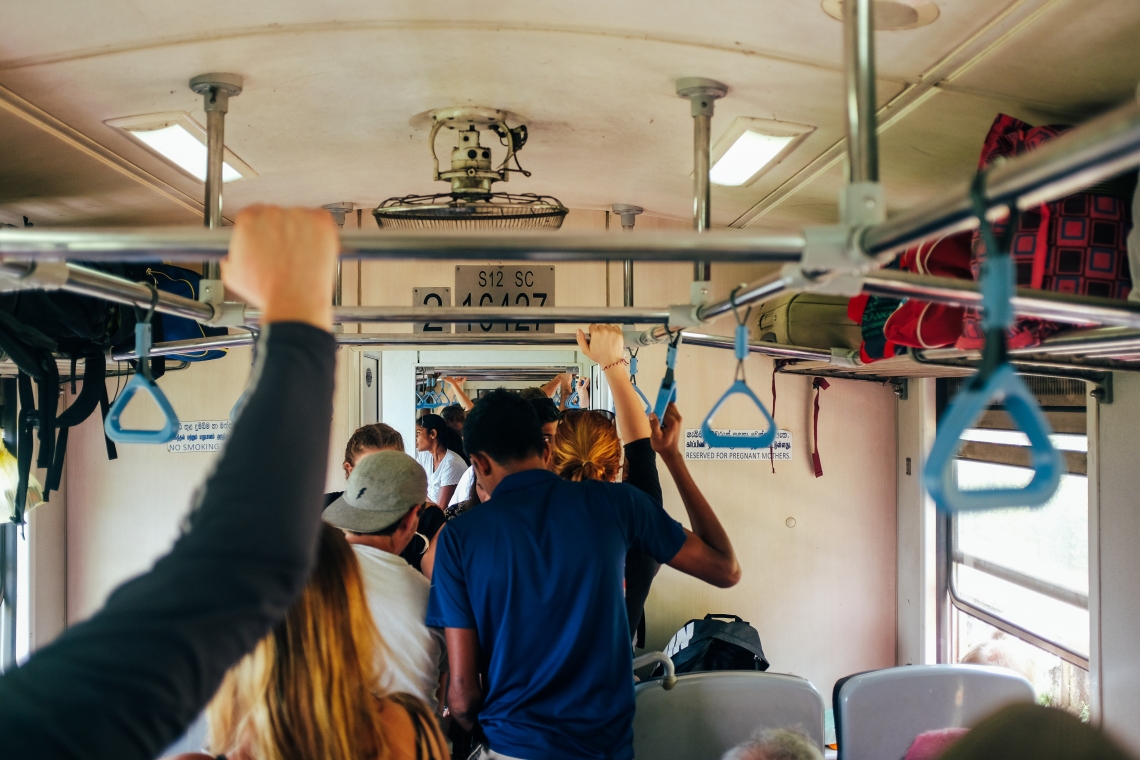 I had researched this town before any other while we were planning this trip. I knew I wanted to spend days hiking, exploring and drinking as much tea as humanly possible. We boarded the famous train in Hatton, thinking we may miss the tourist rush and have an easy embarkation. Nope, absolute masses of people arrived just as the train did. There was no being British here, get ready to run, push and squeeze your way onto that train. Like a pack of wild animals the people who had secured the door area at a previous stop didn’t even want to move to let people on and as soon as the wheels started moving again they guarded that area like crazy, no hanging out of the door on this train then. 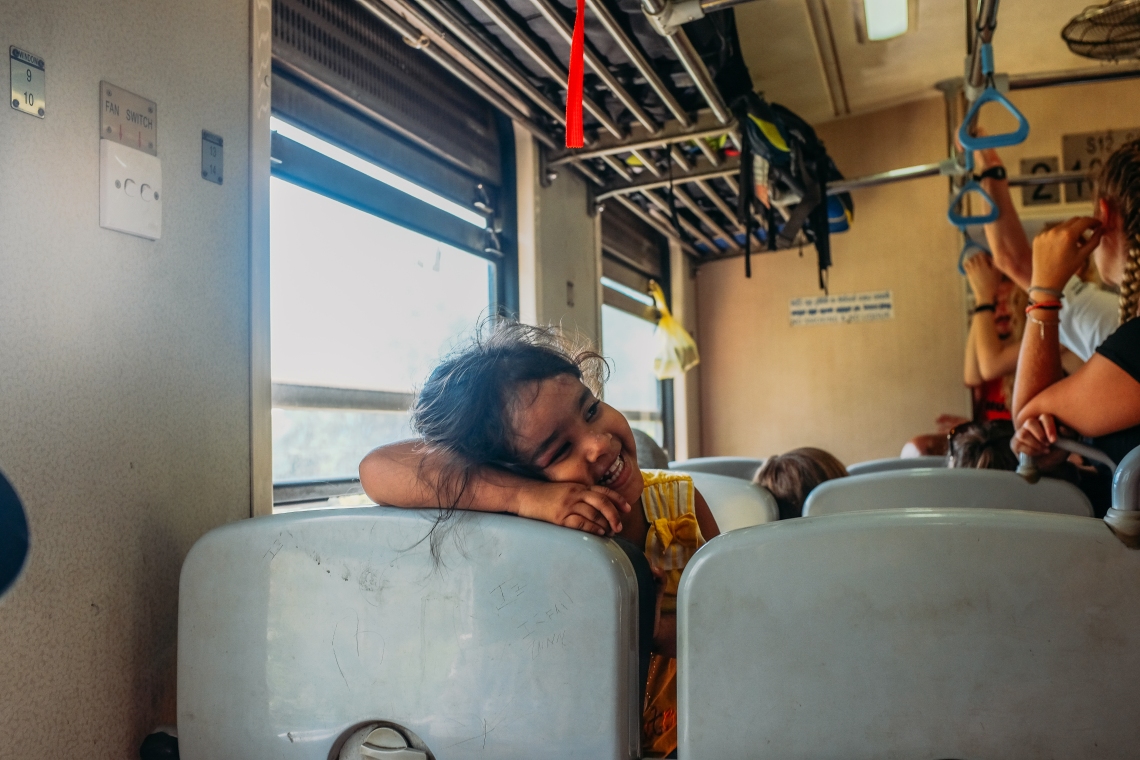 I was so excited to ride this train, dubbed one of most beautiful journeys in the world. The train climbs higher and higher into the hill country and soon all that surrounds you is luscious tea plantations. Unfortunately due to the train being so full I couldn’t even get near a window let alone the door so my photographs are limited, apart from the split second some guy’s girlfriend braved the toilet, so I hopped in her window seat to snap a few photographs. I assure you, it was beautiful, amazing and breathtaking at times, I am somewhat kind of happy I didn’t focus on taking photographs as I got to sit back, relax and watch the world roll by. 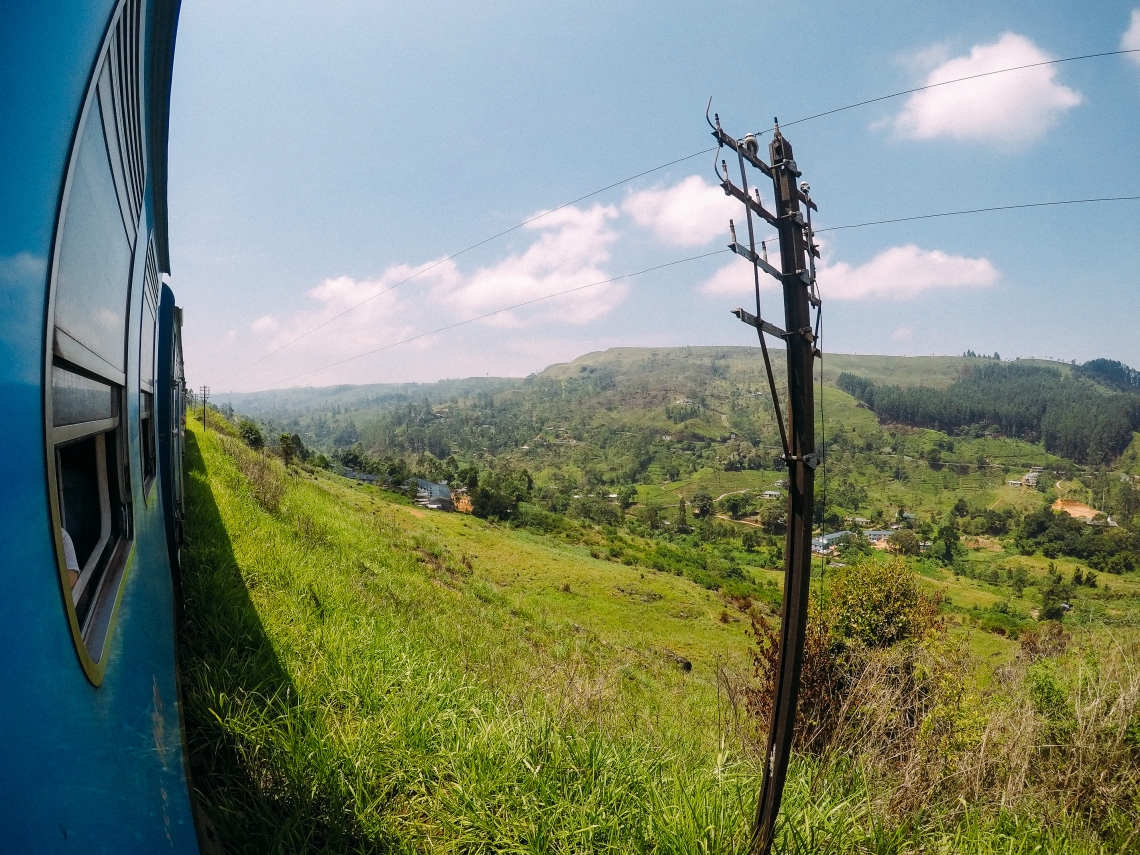 When we reached Ella, we left the station to a bombardment of Tuk Tuk drivers however not one knew where our accommodation was. After a lot of walking up and down the same street, being distracted by puppies and begging a driver to take us to at least the rough location he called our guesthouse and found it. Turns out if we had skipped the train tracks and walked for about 5 minutes we would have been there a hell of a lot quicker. We had arrived and our host was waiting with the biggest pot of tea, a full bunch of bananas and the majority of Ella’s biscuit supply. I wasn’t complaining. After dumping our bags we pretty much ran out the door to explore. As we were here for four days I didn’t want to cram everything in to one day. Today was all about walking and a hunt for cake. Ella town is literally one road with bars, cafes and a few shops, so we completed today’s activity in about 8 minutes. We decided to drink more tea and head out for birthday festivities. I do not function well in heat at all so waking up before 7am in Sri Lanka wasn’t abnormal, all so we could get out and at least enjoy a few hours without turning into a melting candles and listening to me complain for the entirety of the day. Our host (who’s name I never quiet caught when I asked) prepared fresh breakfast everyday at whatever time, perfect! We were off to explore mini Adam’s peak hoping it would be as amazing as its big brother. Disclaimer, this is not a hike… it’s a gentle walk up a very well-marked path through some beautiful tea plantations. When you reach the top the view is incredible, 360 views of Ella, Ella rock staring right at you and luscious green as far as the eye could see. We decided to keep walking and climb down the hill and up the other side, this required a little more effort especially under the rising midday sun, thank the lord for headscarves. But boy it was worth it, more views, more green and a perfectly placed rock for you to sit on for some epic photographs. We spent a lot of time sitting at the top here, watching the people, the view and burning so bad that for the next week I sported a lovely red collar. After deciding we would comeback one evening we descended straight into the hotel at the bottom of the hill for shade and juice. Robbie, now a green tea master was on a mission to sample the best while in Ella so started his quest right away. 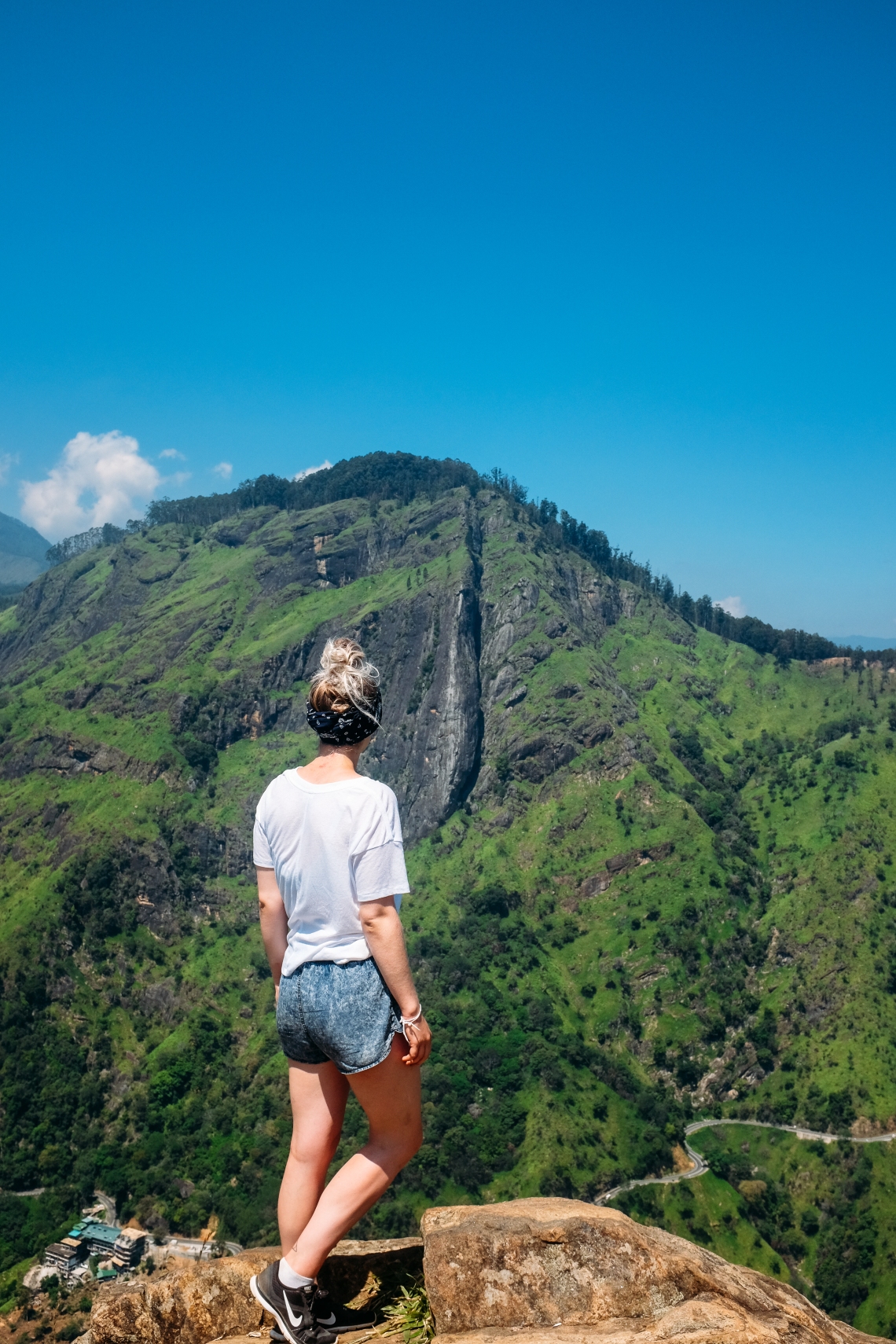 After lapping up the fan cooled terrace and paying for my overpriced juice (the view was worth it ) we went in search of the famous 9 arch bridge. There are multiple ways to get to the bridge, one being by Tuk Tuk but we were well keen for some more hot humid air to enter our lungs so followed the sign through a forest, the walk down was pleasant and best of all shaded. The bridge is a pretty impressive piece of architecture, Robbie has a thing about bricks being a builder and all so I was fully educated about arches and other brick related facts by the time we left. Being the world’s clumsiest person, like I can literally trip over my own shadow, I was banned from standing or sitting on the bridge wall. Robbie however is well-balanced so happily climbed up and perfected his posing for me.

After some time waiting for a train and trying to keep the sun off my already sunburned body we started the climb back up. I probably didn’t mention the cows on the way down because they were to the side of the path happily chomping away on the long grass. Now, what looked like the biggest female, possibly pregnant cow was obscuring our path. She didn’t look particularly mean but those sharp horns on her head did and I didn’t fancy my chances getting past her to leap over a fallen tree that she had taken up residence guarding. After deliberating how to get past, clapping loudly and politely asking the cow to move Robbie just went for it. The bloody daredevil, he made it over the log narrowly escaping a horn to his nether regions. I however am not that brave. After a good ten minutes staring at the cow we had attracted quite a crowd, no one brave enough to take the leap. Until, a wee English girl appeared, obviously quiet eager to reach the bridge… I quote “its just a cow, what’s everyone so scared of” as she clambered over the log to be met by a very stern headbutt to the left leg. Luckily her leg hit the cow’s forehead and she narrowly missed being impaled on one of the horns. Sheepishly returning to the back of her group and blaming the rest of the crowd for not warning her another fifteen minutes had passed. It was time to climb through the trees, fallen logs and whatever else may lie on the hill adjacent to the cow. Just as me and a fellow traveler trapped on the south side of the cow started to climb we heard its bell chiming away, the old girl had decided that was enough drama for today and moved to the side of the path for some fresher greens.

Accidents avoided we were back in Ella town sipping on some cold drinks & banana leaf curry in no time.