We boarded the plane after a whirlwind few days in Sydney heading to the first destination on our trip. Sri Lanka, a little off the beaten path, not as popular as the rest of Asia at the moment and about to come across two very excited backpackers. After zero travelling for a year due to waiting for our NZ residency we were so ready for this trip. Everything was planned out loosely, my backpack was so full I was afraid I would be collecting single items from the airport conveyor belt and my excitement levels just peaked that high I struggled to even sleep on the plane!

My bag entered Colombo airport in one piece, however when Robbie lifted it off the belt it ripped, the whole strap ripped from the bottom up, the buckle fell off and I was left with a gaping hole. Luckily Robbie had a spare bag liner so I was able to wrap it around my bag to avoid any spillage and a trail of underwear following me everywhere we went. It was hot and it was also super late. We didn’t arrive to Colombo until 11pm. After collecting our bags we quickly booked a taxi with the closest tout as our priority was to wash and sleep. The taxi ride took around 45 mins from the airport and then 20 mins extra trying to find our accommodation. Driving down the back alleys of Colombo in the dead of night was slightly unnerving. Eventually we found our guesthouse, a very tired, old-looking guy wearing a skirt answered the gate after us banging continually for ten mins, we refused to let the taxi driver leave, as we didn’t want to be stranded or the local stray dogs late night snack. 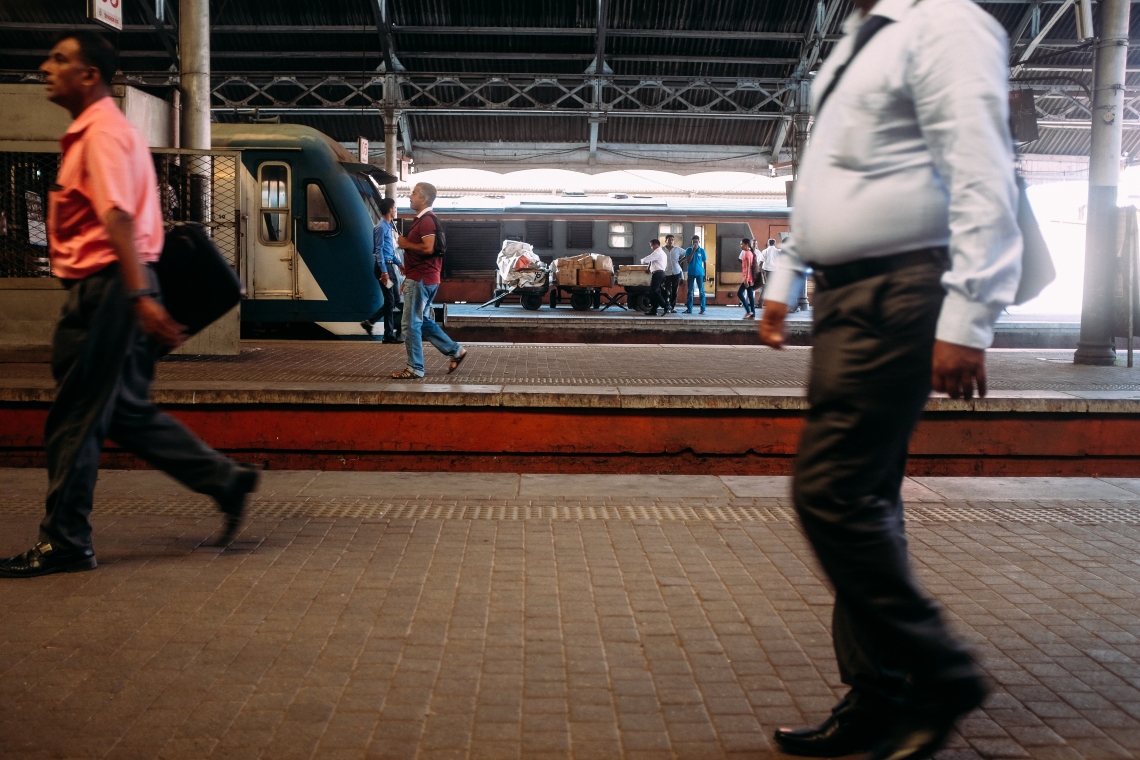 The next morning after a beautiful chilly nights sleep under the air-con we jumped in a Tuk Tuk and headed for the train station. The driver stopped at the best bakery for some train treats that Robbie had eaten before we even got there. The train stations are everything I had imagined. Busy, bustling and full of life. If you have ever seen Slumdog Millionaire that’s what it reminded me of. We had missed the train by seven minutes so we sat and waited two hours for the next one. I kept myself entertained people watching, taking photos and drinking as much as I possibly could, it was hot in the station, we had hit midday and the daily rush hour. 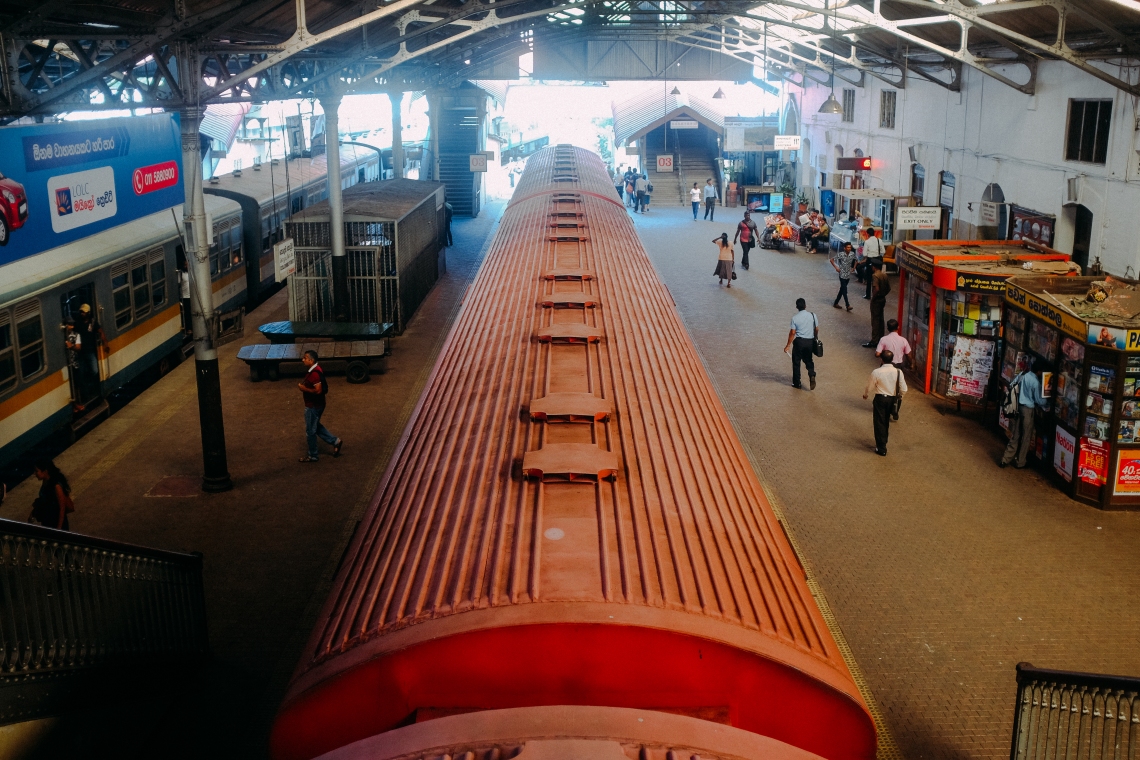 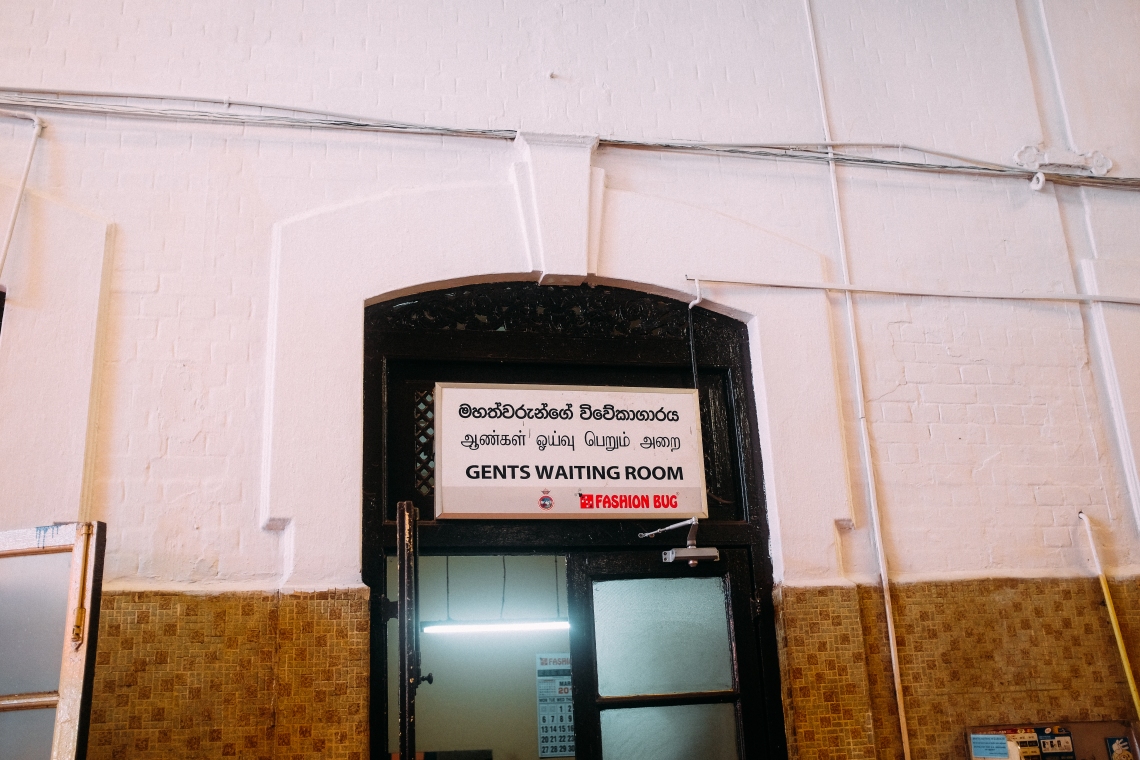 We made a friend. We didn’t get his name but he made sure we boarded the train safely and even helped with my bag, this is after waving at us for the two hours previous. He then handed me a piece of paper, which explained he was deaf and worked at the station helping tourists for tips. I tipped him, of course I did, I’m a sucker for a friendly face and some local help. 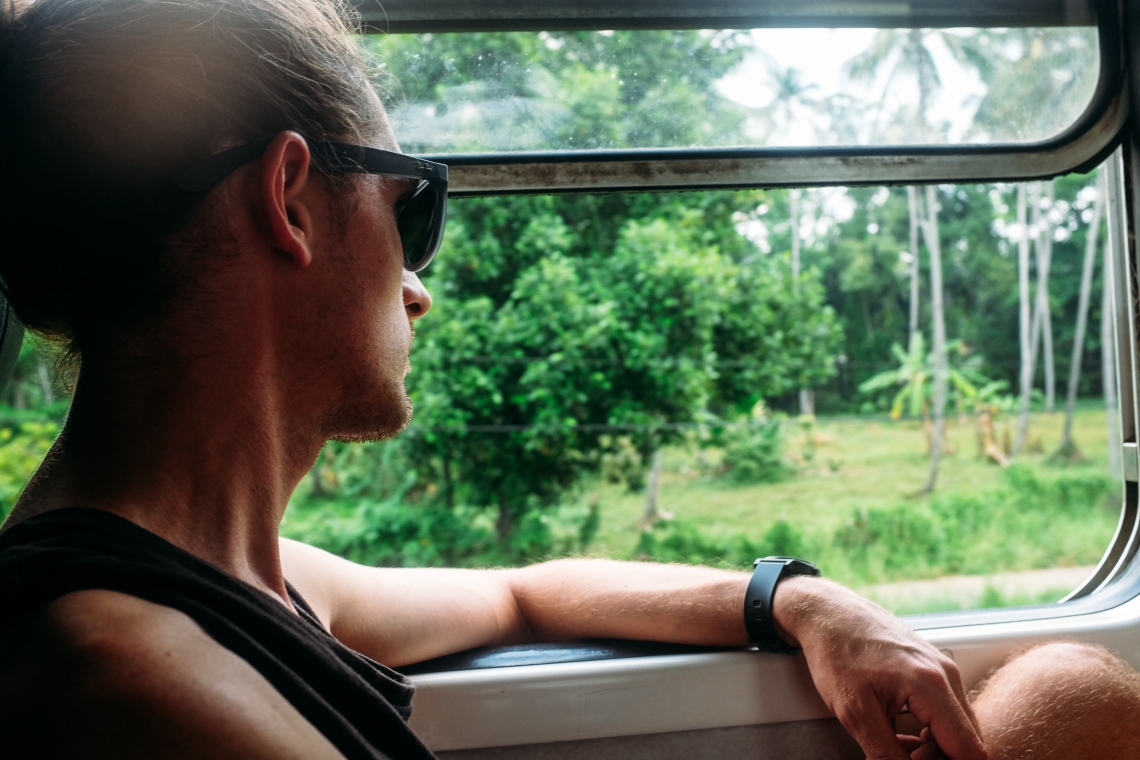 The train ride was BEAUTIFUL! We sat back and watched Sri Lanka roll by en route to Kandy. Second class was comfortable and cheap. A 3 and a half hour journey cost us around $2 each. When we reached Kandy we hailed a Tuk Tuk, wedged our bags in the back and went to find our hostel.

The rain came down like no tomorrow, it was so heavy and paired with thick fog meant our first day in Kandy consisted of a lot of trip planning & tea drinking. We decided to make the journey to Sigiriya the next day and Pinnawala for our last day, getting back in time to explore the rest of Kandy city. Over some Lion beers & a green curry we had already found a way to get to Sigiriya and Pinnawala despite the hostel staff relentlessly trying to sell us overpriced tours. We didn’t really like the hostel we stayed at, Hipsters Hangout was also the hangout for the owners friends who would bring their huge dogs and trucks right into the bar area. It was a weird set up with a few desperado girls working for free on the promise of a new Vegan café opening in the centre. However it was a bed for the night and the beers were cold so we saw past the weird vibe.

When the rain cleared we went straight out to explore. 300 Rupees seemed to be the standard price for any Tuk Tuk ride big or small. Joining the rat race of Asian roads is somewhat satisfying and gives you that real travelling buzz however when you’ve seen one Asian city you feel like you have seen them all. We did a lot of wandering, a ride up to the big white Buddha that overlooks the city and some haggling. Haggling for Tuk Tuks and also a skirt so I could visit the temple of the tooth respectfully. 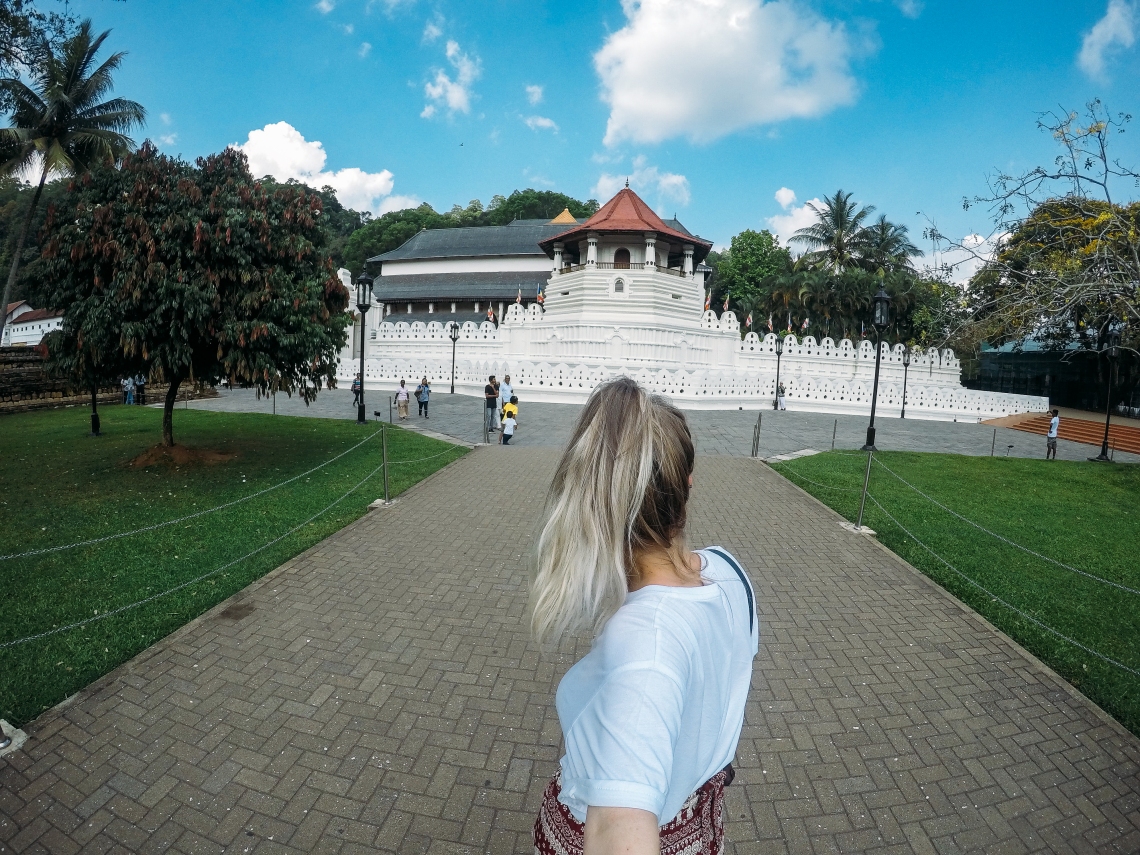 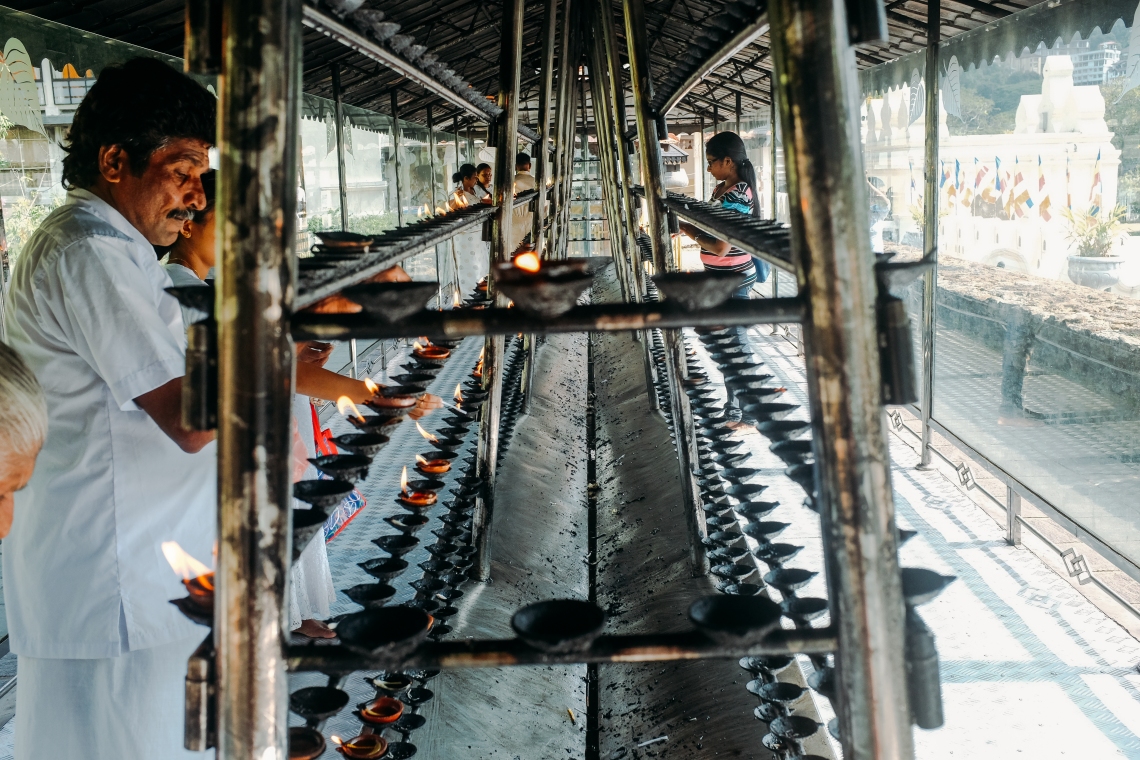 Robbie didn’t seem to fussed so took up residence on a bench by the lake as I hunted around for Buddah’s tooth. The tooth is only brought out once a year for the parade and the rest of the time is kept in a box behind a huge wooden door surrounded by golden gates and golden Lions. As I waited patiently for the cleaner to finish slopping his dirty mop over the golden Lions heads so I could take a few photographs I watched some children during prayer, lit a candle for my loved ones and wandered around the grounds some more, running toward any shade for my poor shoeless feet.

Kandy is pretty, the lake is beautiful to walk around, there’s culture, hustle, bustle and plenty of authentic eateries to keep your mouth-watering. I’m happy we only spent the time we did there and used it as a base to visit other places. For the first few days of settling back into the ways of living out of a backpack, it was perfect but now get me to that hill country and those beautiful palm tree-lined beaches!

One thought on “Kandy”