Japan is insane. This trip was wild and we loved every single second of it. From the super fast Shinkansen trains to wandering through forests on the outskirts of big cities, Japan did not disappoint. There wasn’t a day on our whole trip that I didn’t enjoy, I made sure that we were waking up early every day, excited at the prospect of discovering new places. Although we followed a well-trodden route we are so happy we did, we experienced everything we set out to on our Japan bucket list and had an absolute ball in the process. 12 days just didn’t seem enough… here are some of my favourite moments from our tour around Japan.

When we arrived at Mount Fuji the mountain was nowhere to be seen. Fresh off the train and all through the evening it rained. It rained so hard that we had to take refuge in a small cafe on the shore of Lake Kawaguchiko and make a run back to the Ryokan before dark. I prayed that night that we would get a clear morning, even just to see the tip would be a dream come true. We woke before dawn and set off across the bridge to a well know photo location. I cried on the route, there he was standing proud, watching over the town as the sun started to rise. Mt Fuji put on the most spectacular show for us that morning. 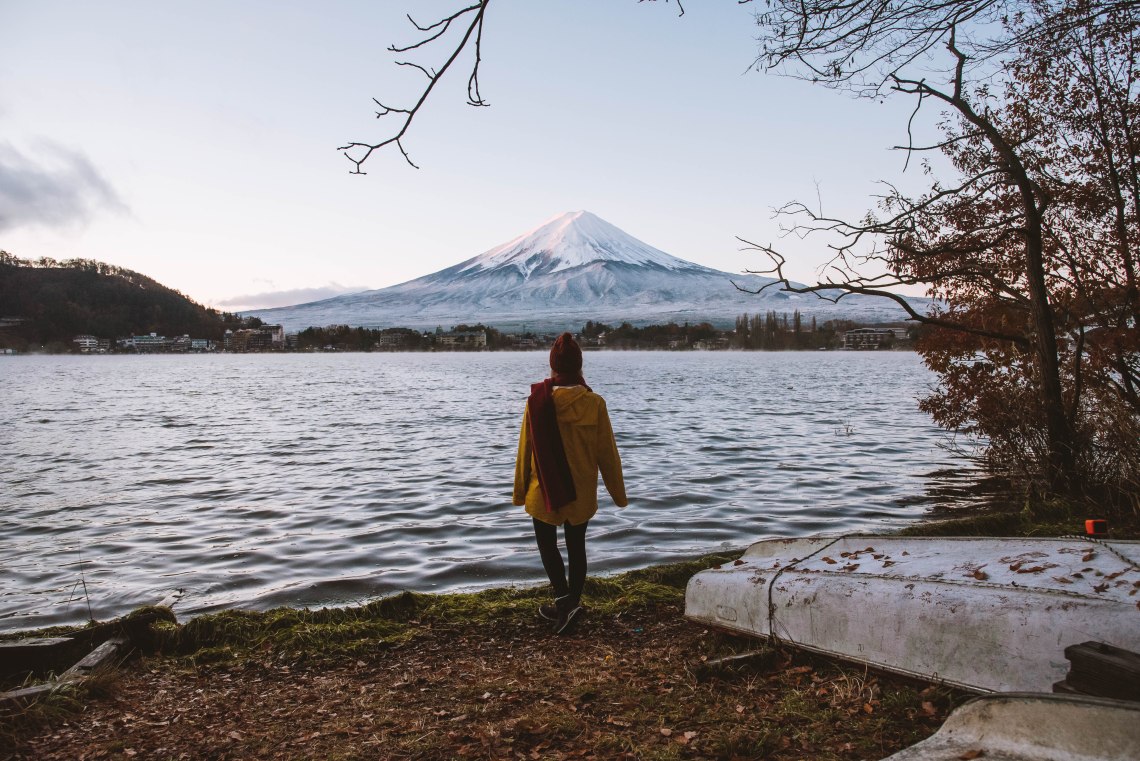 Watching the Snow Monkeys in their personal Onsen.

Before we left for Japan we watched a show called Wild Japan on Netflix (I highly recommend) they filmed the monkeys in their own onsen high in the mountains, grooming and chilling out together. We embarked on the journey from Nagano and my, oh, my we’re we in our element. Hundreds of monkeys came into view as we rounded the boardwalk through the forest. Some on the rocks, some running from the Alpha male and some hanging out in their very own spa. To top it off it was snowing, the monkeys didn’t have a care in the world for us humans and they happily soaked their troubles away in front of us. 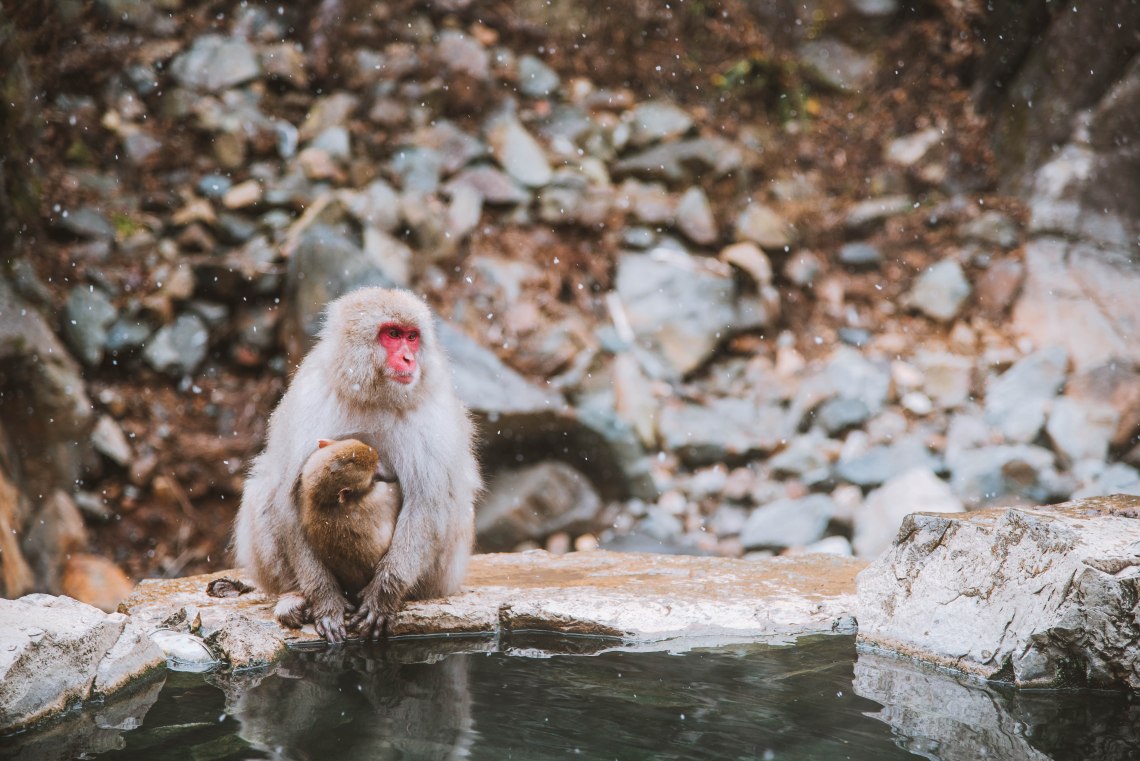 Oh the food, don’t get me started on the food. In fact, DO because it’s so god damn delicious that I don’t think I can eat anything Japanese again unless from Japan. Kyoto is well known for its Ramen and man is it good. This was also the first place I found vegetarian Ramen, hallelujah! I had a HUGE bowl of veggie ramen topped with rocket and a soft boiled egg, it was that good we went back twice!

Forest Bathing at the bamboo forest in Kyoto

The Japanese are famous for their meditation, healing and using their surroundings to help them on their life journey. Forest bathing is one of the many past times handed down over the years. Forest bathing is an opportunity for people to take time out, slow down and connect with nature, the Japanese have known for years that spending mindful time in the woods is beneficial for body and soul. Now, don’t worry we didn’t strip nude and bathe together in the woods we just walked slowly, calmly and with the wind through the beautiful Bamboo Forest on the outskirts of Kyoto. Such a peaceful morning and one I won’t forget for a long time. 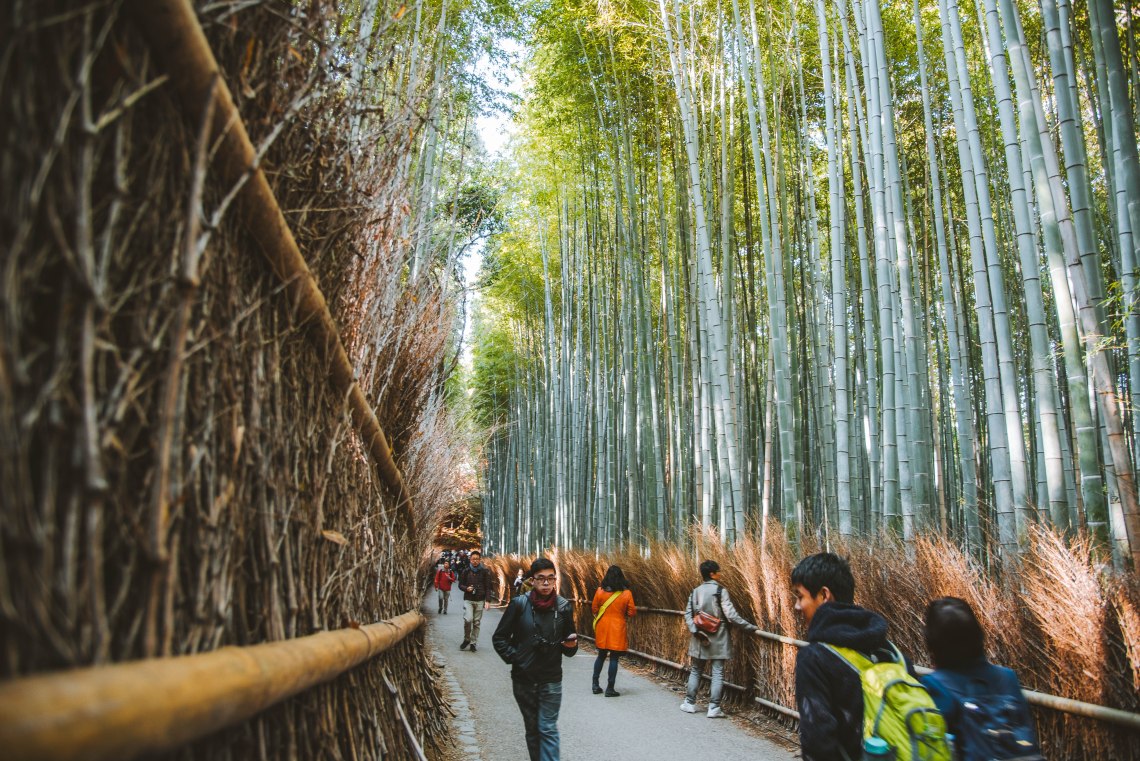 Tokyo, bright lights, big city and 1000’s of people trying to cross the road at the same time. The Shibuya crossing is world-famous, so much so at its busiest, it can see over a million people a day take the route through the crossroads. We joined the masses more than once and crossed toward Shibuya downtown. It was manic but also pretty calm, the Japanese are very polite and they don’t bump or barge you so if you’re wanting to get that perfect photo, then you’re going to have to commit to the masses.

Thank you Jetstar New Zealand for getting us to Japan, we can’t wait to return!

If you are thinking about traveling around Japan then click the link here to check out the Japan Rail Pass site. We used our pass multiple times a day & it was THE best way to get around the country. This link is an affiliate link, it costs you nothing to click the link but means I can buy some extra sushi at the weekend!

One thought on “My Japan Highlights”