I couldn’t think of a better place to field test and train than right where Sir Ed himself trained for his very own Nepal expeditions. I have said it before and I will say it again, Mount Cook is the most magical part of New Zealand, don’t ask me why I can’t quite put my finger on it, it just is. The National park, the mountains, and the long drive into the park make it feel like you are entering another world. After we received our box of Kathmandu gear we decided to pack the car and head straight to the mountains. 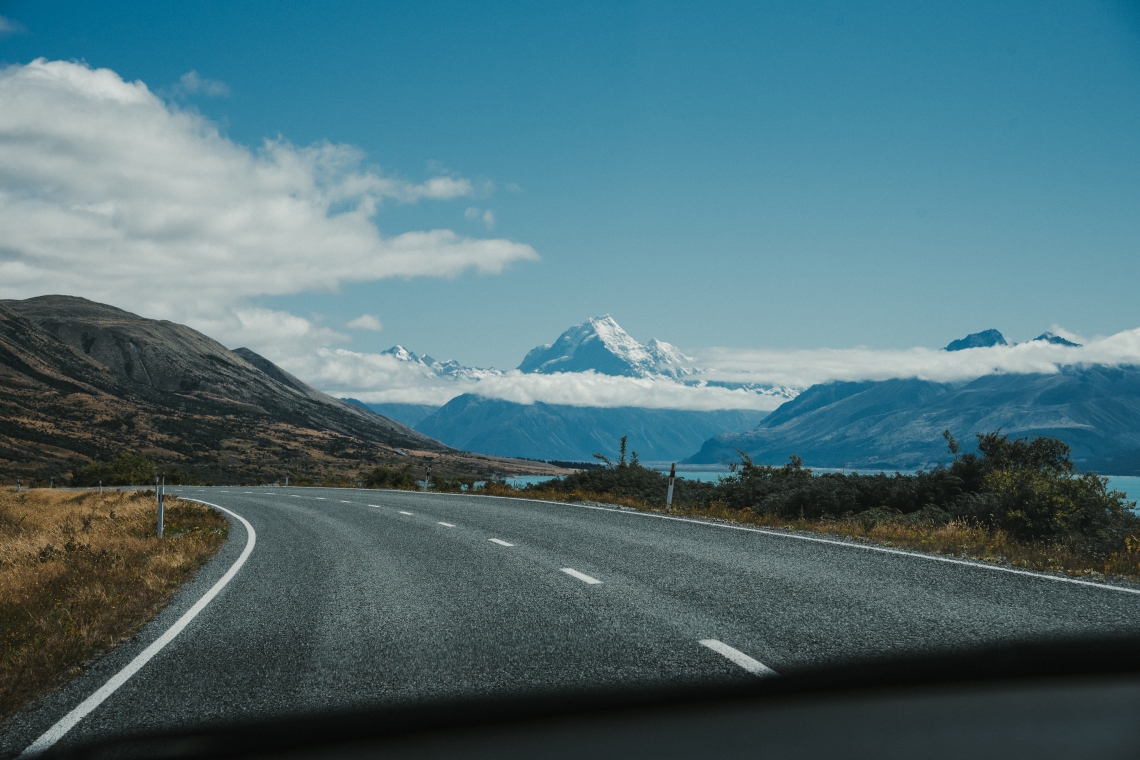 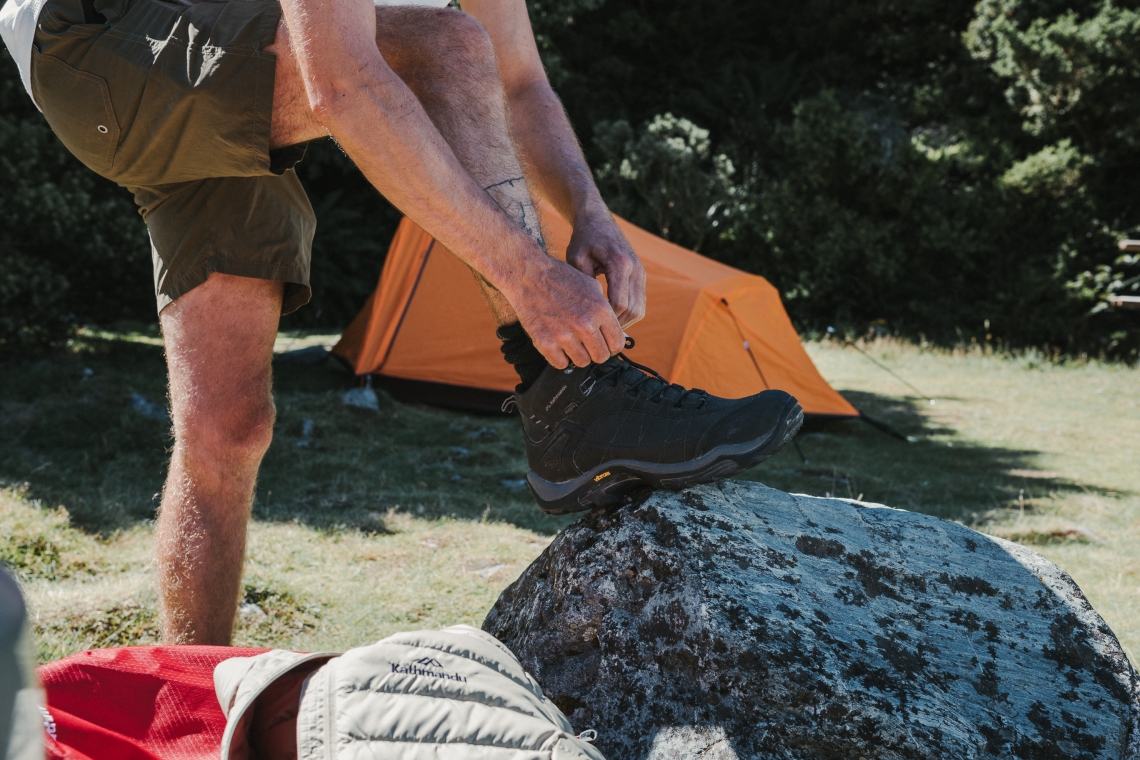 Saturday morning rolled in and the car was full to the brim with camping gear, Kathmandu clothes, and snacks, of course. We hit the road around 8am, aiming for midday to arrive in the park to guarantee a camping spot at the White Horse campground that sits right at the start of the Hooker Valley track.

We made it, drove down that iconic road and set up camp. When I say we I mean Robbie did all the driving and setting up camp. My only job was to clear the area for rocks, which I did, terribly. Robbie trusted my camp spot choices and set up the tent, just as he was knocking in the last guide rope peg deep into the ground he got inside the tent to smooth out the base, what do ya know? One big ass rock was there waiting to rip the bottom of our tent when we rolled over in the night. A very angry looking camper appeared back out of the tent, dismantled it and then re-pegged on land he deemed fit. My bad, I did, however, open a beer waiting so I may have redeemed myself there. The White Horse campground is only $13 per adult per night and all you have to do is pay into an envelope, post it and display your ticket on your car or tent, DOC ranges do drive around so make sure to be a good egg and pay your dues. The camp has three separate toilet blocks, with flushing toilets – Hallelujah! And sinks for you to wash up in. There is also a bin store so you can dispose of all your rubbish and recycling. It is all on a first come, first served basis so don’t leave it till late to arrive. 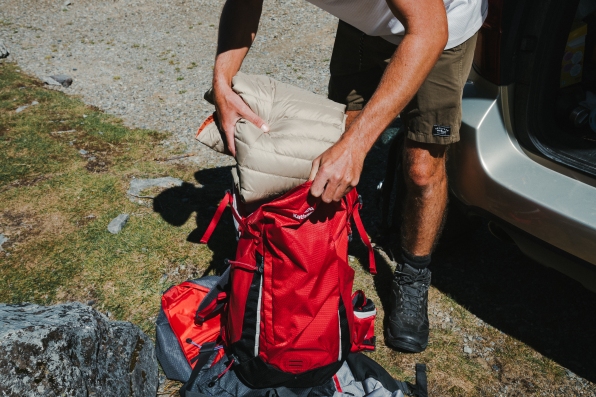 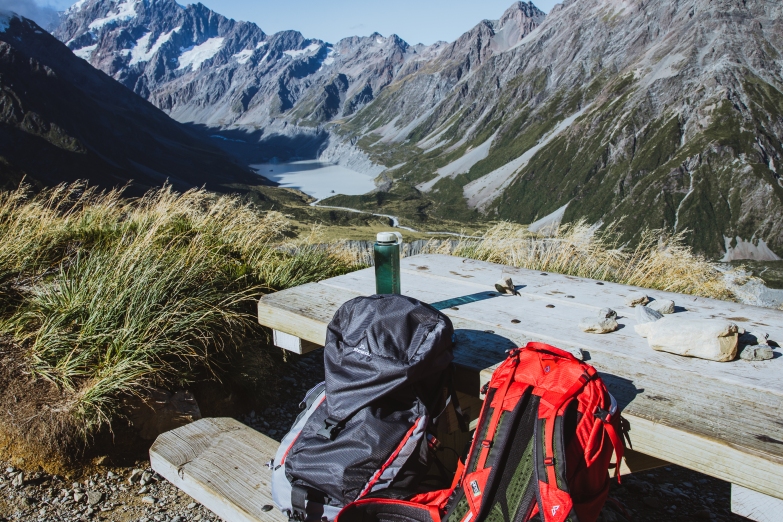 The chosen track of the day was Sealy Tarns for Sunset. One, because who doesn’t love 2200 wooden steps and two, it was a great training hike for us. Also, the view from the top is out of this world and I needed to see that mountain away from the masses. We set off. Bags packed with all the gear we wanted to wear and test on our bodies we made our way to the base of the hike. I’ve done this track before when we completed Mueller Hut last year so I knew what was in store for us, Robbie, however, had not and like the trooper he is, didn’t complain once, despite the beating sun an having to dodge the groups coming down the steps.

It wasn’t as long as I remembered, still hard yes, but just not as long. As soon as the track starts to flatten and Mount Cook is right there, sitting on your shoulder you know a snack break is imminent. There are two perfectly placed picnic tables at the top where we took refuge to stretch our legs. We were soon joined by a Kea, hopping around waiting for us to drop some of my OSM bars, I watched him for ages probably a little too long as the sun was quickly disappearing behind us. 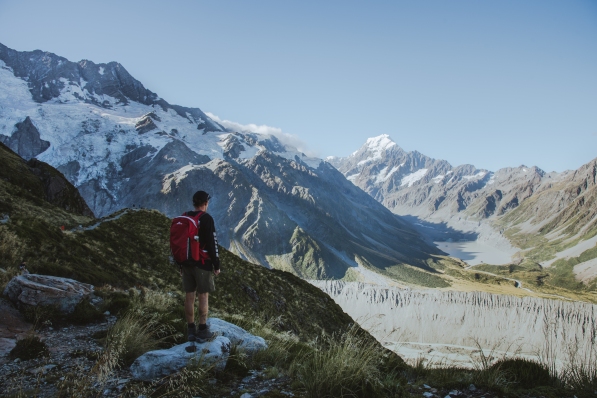 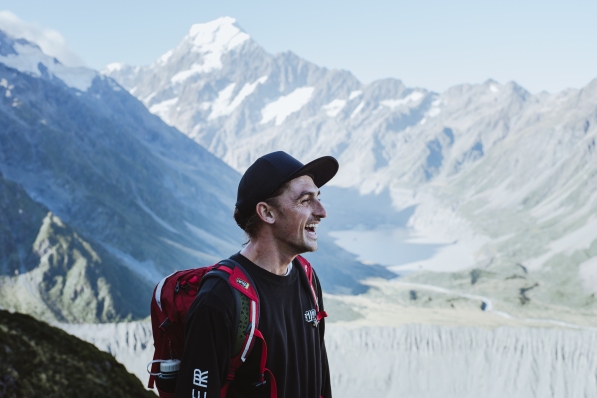 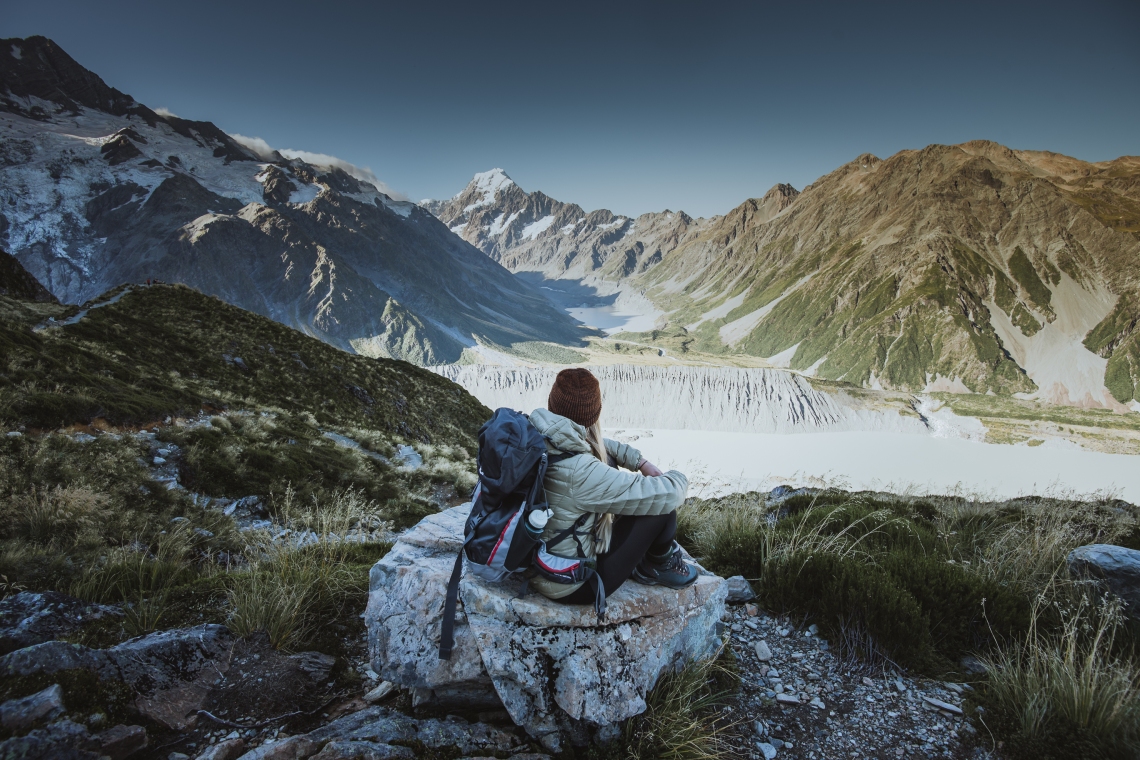 It quickly became a race against the light, we ran to the last section of golden light and grabbed some shots of our gear, before soaking in that view for one last time and heading down. Our golden hour plan was half successful however the light quickly went behind the mountains above us leaving us in shadow, it was still beautiful to be up, on the tarn totally alone for at least an hour. On route back down we took it slow to avoid buckling knee’s and my clumsy toe trip at the top was enough to scare me into falling face first down the stairs, a steady pace was one hundred percent the better option. 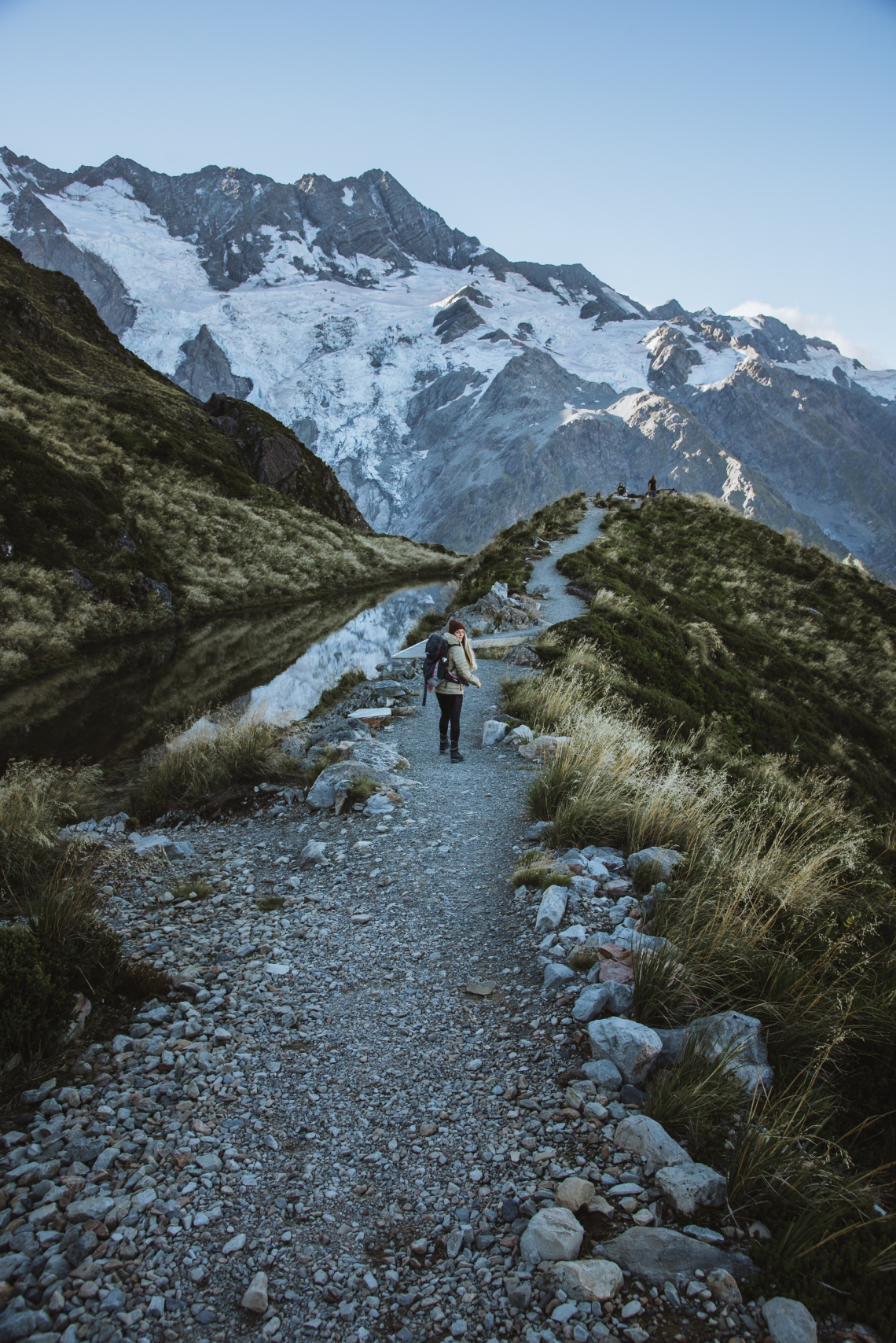 Back at camp and it was chilly, our down jackets were very much appreciated. We cooked a gourmet meal of Falafel wraps and salad before finishing those hard-earned beers and retiring to our sleeping bags. This was the first time I had felt cold since last winter. I had leggings and tracksuit bottoms on, a t-shirt, a long sleeve top and a jumper, oh thick socks and I was wrapped tight in my sleeping bag and I was cold. I slept the night through and although it was a little nippy I would prefer to be cold than warm in a tent.

My alarm was set for 5.45am although I had been awake since about 4am toying with the idea about making a visit to the bathroom. I didn’t, I just sat and waited until it was at least half reasonable to wake Robbie from his icy slumber. Heaters blasted our eyeballs dry as we drove on round to the Tasman Glacier for sunrise, coffee on the mind and a short hike would sure wake us up. We opted for the Tasman lookout which is the first track to the left as you set off, oh lord, more wooden steps. I was freezing cold but after three minutes tackling more steps my body went into overdrive and I completed the short twenty-minute walk in just my sports bra and leggings, Robbie was still wearing all his layers and wondering who had replaced his girlfriend with a mad woman. 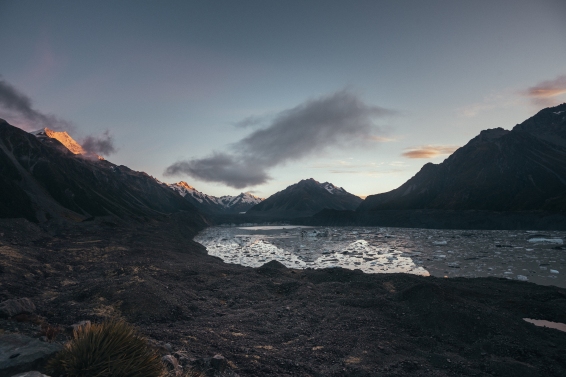 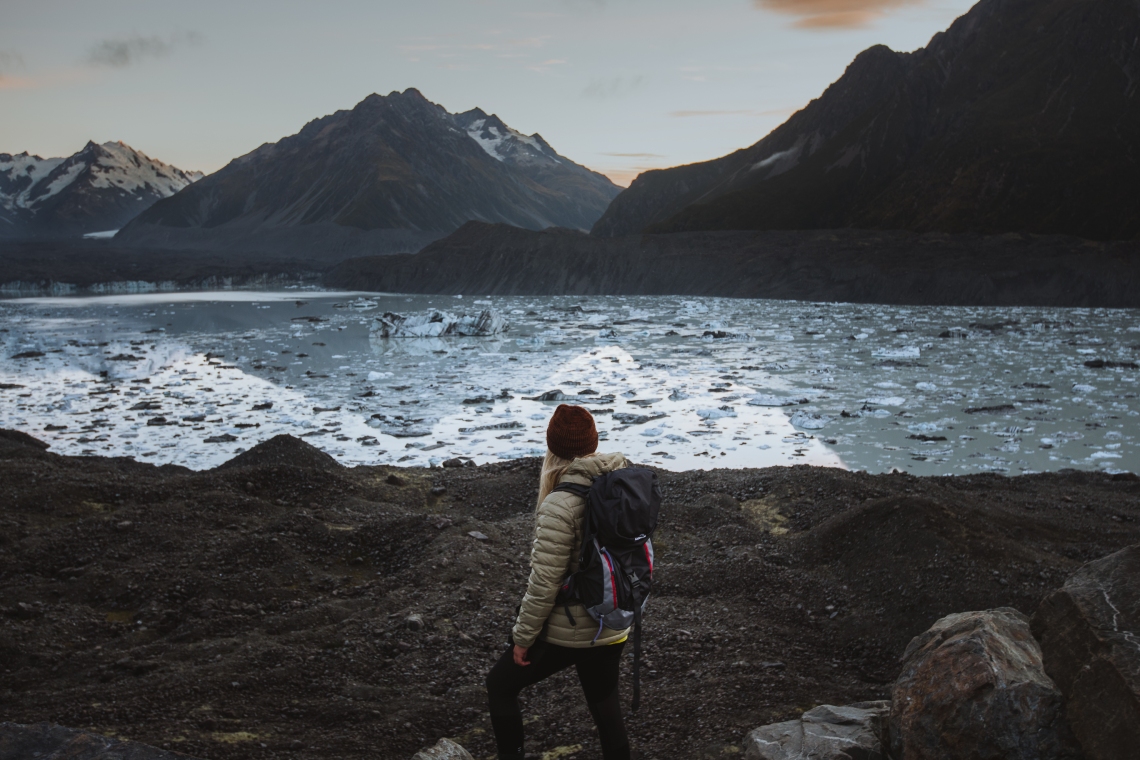 What greeted us as we reached the top was unbelievably spectacular. We had heard about a colossal piece of ice that had broken away from the glacier the week before, here it was floating around the Tasman Lake, broken up and peppering all the water we could see. Initially, my heart screamed with extreme gratitude to be witnessing something so beautiful, just the two of us in the early hours of Sunday morning but quickly, my thoughts turned to sadness. It was such a mix of feelings standing above as the light danced on the mountains. It was beautiful don’t get me wrong, but my heart pained for our planet. We watched the light hit Mount Cook and stayed at the lookout until it was time to leave and boil that kettle once more, however, we decided to walk around further to the boat jetty. Here is where we got a real feel for how huge these icebergs were and how many pieces had made their way around the lake. After taking some time to shoot around the lake before retiring and walking quietly back to the car taking in the surrounds. 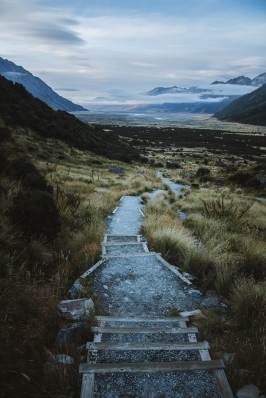 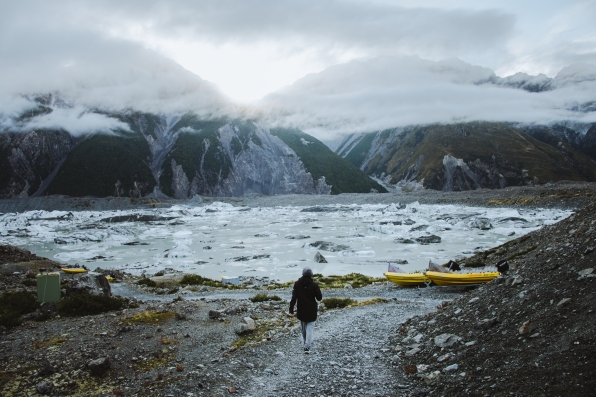 We didn’t feel like it was time to leave the park, just yet. So after a hearty campground serving of honey porridge, we set off the Hooker Valley track. Top tip – set off early, you will have fewer people on the tracks and uninterrupted views and plenty of time to take photos on those iconic swing bridges. The Hooker Valley track is one of my favorite tracks, its easy and the views are insane. It is also the only track that will get you up close and personal with Mount cook (without having to climb him) 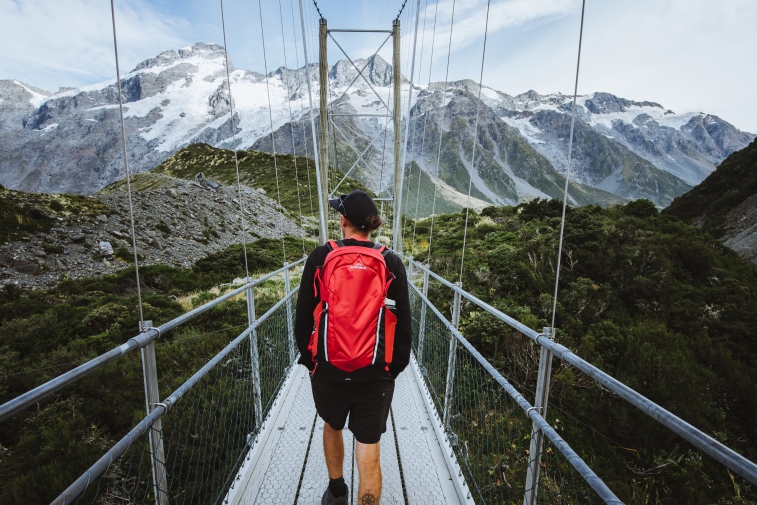 Robbie expertly packed up the car upon our return and before we knew it the weekend was drawing to a close and we were en route back to Queenstown. All in all, field testing our new Kathmandu gear in Mount Cook was an excellent choice.

Until next time, Aoraki.