I have never been a religious person, but something in that moment came over me. I felt like I needed to tell the people I had lost that I loved them. Maybe it was the overwhelming sense of achievement I felt from finally sitting down after climbing 5200 steps to the summit, maybe it was because I was surrounded by a multitude of different people and religions or maybe it was because in my head I thought this was the only moment I would ever be close enough to heaven to say hello. Nothing really mattered; I bowed my head, said my piece and continued to huddle up to Robbie, my personal windbreak and biscuit supplier. 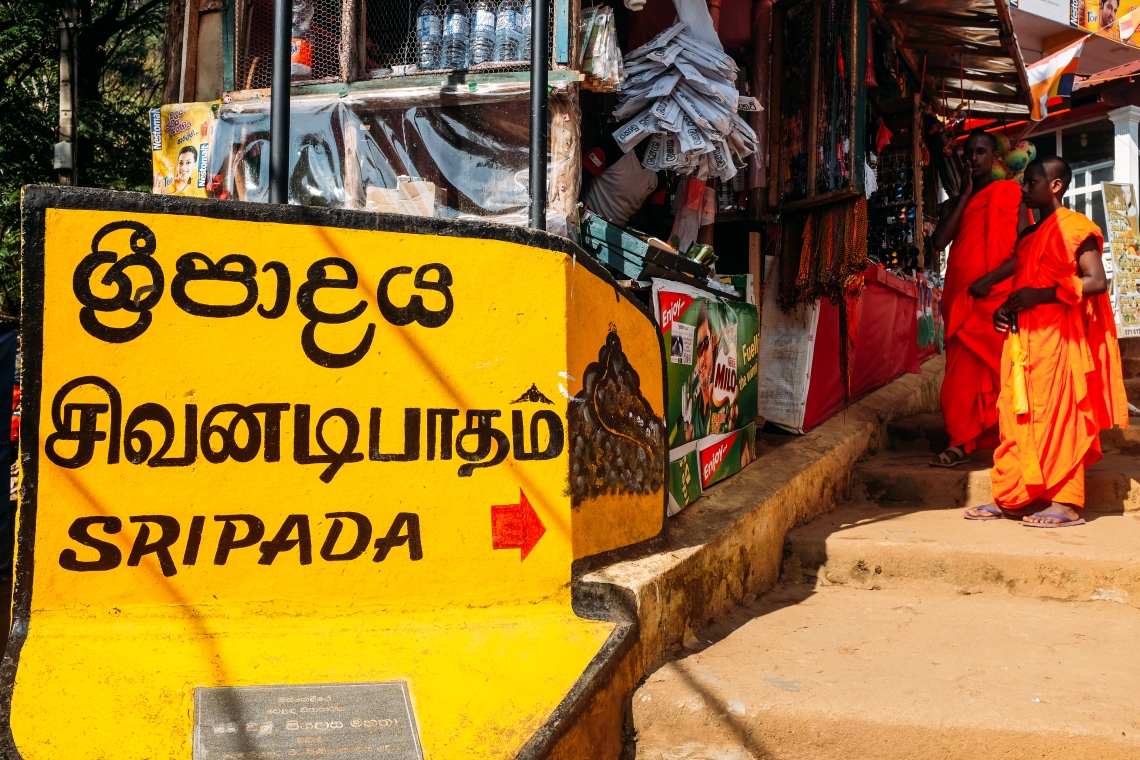 Adams peak is regarded one of the most sacred places on earth, also know as Sri Pada, the huge somewhat intimidating peak of 2243m is located near Hatton in the central highlands of Sri Lanka. For Sri Lankans, Adams peak is an important pilgrimage site and many make the trip at least once in their lifetime to climb and witness the spectacular sunrise. Depending on who you are speaking to Adam’s peak holds different religious significance. The Buddhists claim it is the footprint left by Buddha on his was to Paradise. The Hindus consider the footprint to belong to Lord Shiva. The Muslims and Christians believe it was Adams first step on earth after he left the Garden of Eden. More poetically the mountain is also known as Butterfly mountain (Samanalakande), a place that butterflies go to die. 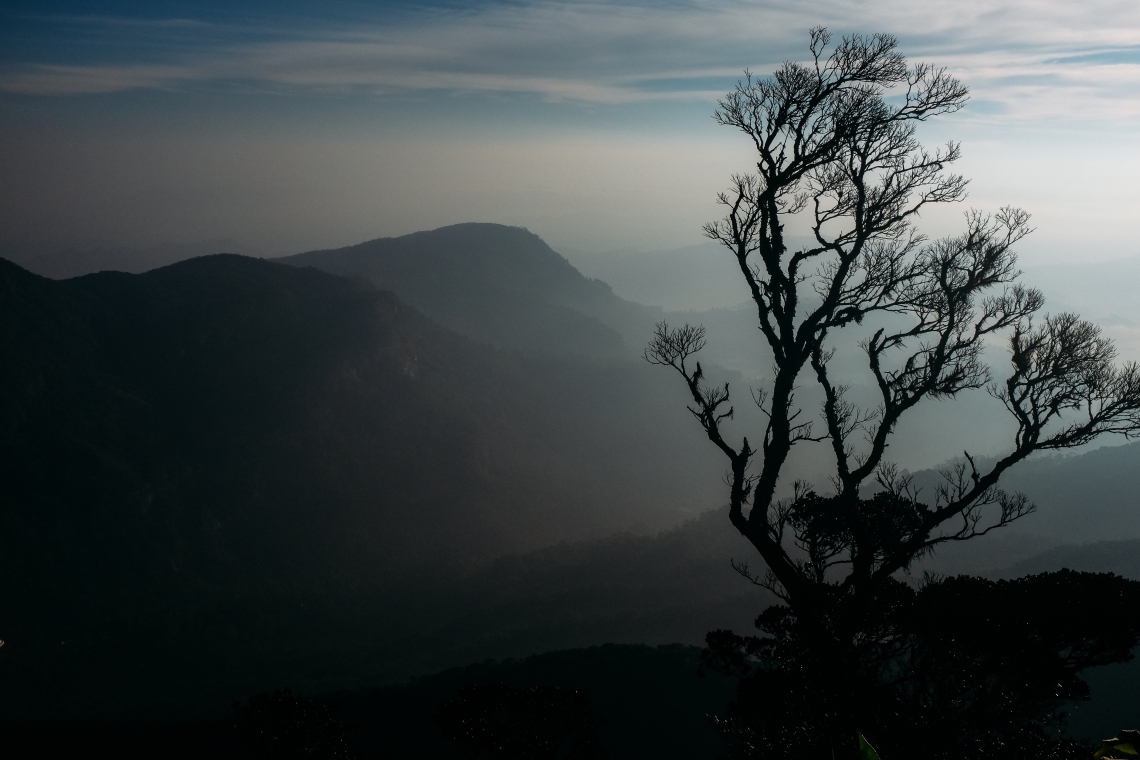 We were in Kandy, planning our next move. I had wanted to visit Adams Peak since the minute we pressed buy on the flights. I wanted to complete a pilgrimage, mingle with the locals and also tick off a sunrise hike from the bucket list. After packing up our bags and leaving our hostel we hailed down a Tuk Tuk, 300 Rupees later we were all three trying to pull our wedged bags out a space big enough for a pineapple. Our train didn’t leave for another half an hour so plenty of time to wolf down some vegetable Rotti’s, Egg sandwiches and the strongest Sri Lankan coffee known to man. After the same spiel as yesterday from the vendor about being able to exchange our foreign cash at a very good price he soon recognised our faces and we paid for our discount breakfast (It’s always funny in Asia how prices can change from day-to-day) and ran for the train.

Running with 20KG on your back is never fun, neither is trying to board the busiest train know to mankind. The popular Colombo – Ella train passed though Hatton, which is where we needed to depart. There were more people on that train that I have ever seen before, we eventually managed to push through to the back of carriage and sit on our backpacks. The unsteadiness of the train and the constant stream of vendors made for a super uncomfortable journey, we were just happy our train ride was going to end after a few hours. The vendors wander up and down the train selling drinks, refreshments, hot nuts and some very unfortunate looking Sri Lankan delicacies that no one dare try. About ten minutes into our journey we realised the cart next to us had plenty more room and a seat with our name on. The English fellow closest to the door tried to prise it open, no luck, it was locked, until one of the said vendors came along, unlocked it with his magic key and with a bit of a scuffle and a very loud NO he pushed the burly English guy back into the ram packed cart. We later found out that was a reserved carriage for pre paid ticket holders. We were a little dubious about putting our bags under the bus when we arrived at Hatton train station, but after some reassurance from the Irish couple also heading to Dalhousie we threw our bags on and paid 70 Rupees for a 2 hour bus ride, which dropped us right outside our accommodation. Bonus point goes to the food vendor who got on the bus and gave us two ice creams for $1, Robbie sure knows how to treat a gal. Fed, watered and watching the tea plantations roll by we sat back and enjoyed the ride en route to our accommodation.

Ayo’s hill was just perfect, great location, great food, super friendly staff & a beautiful view of Adams peak from the balcony. We choose to walk the 2.5km in to the town to see what was going on, nothing, literally nothing was going on. All the markets are closed and only open at night to supply hats and woollens for the ascent up Adams Peak. The walk in however was beautiful, we both felt like we had landed in the real Sri Lanka, tea plantations everywhere, beautiful views and a reassuring sense of calm. We decided to pay the 200 rupees for a Tuk Tuk back to the hotel and realised the short 2.5 km we had walked turned out to be a whole lot longer. We took up residence on the balcony, drinking tea and watching the magical lights of Adams peak start to appear in the distance. It was beautiful, like a stairway to heaven illuminated in the black of the night sky. It was time to pack our bag and nap before the shuttle bus at 2am. The mini bus screeched round the corner, quickly stopped and we were all bundled in, he was late and ever so apologetic. We started to walk around 2.45am which would have been earlier if Robbie hadn’t decided he need to fuel up on Sri Lankan coffee & spicy Rotti’s. I prayed his stomach would make it to the top.

The walk was great… to start. I had a spring in my step, lungs full of chilled air and a heart full of excitement. I had just been blessed by Buddhist monks, who wished me well on my journey, tied a white ribbon around my wrist and bid us farewell and good luck. Little did I know that a few hours later I would be needing their prayers. Shops, tea houses and lights pave the way as well as the monstrous 5200 steps all varying in size, width and determination. Small metal handrails frequently made an appearance, which for me became a godsend as I hauled my tiring body further toward the summit. At one moment I has to stop myself being so dramatic as I watched a guy who looked a little older than me, stride past, carrying a child over each shoulder, his what looked like 90-year-old, barefoot grandmother wasn’t to far behind. 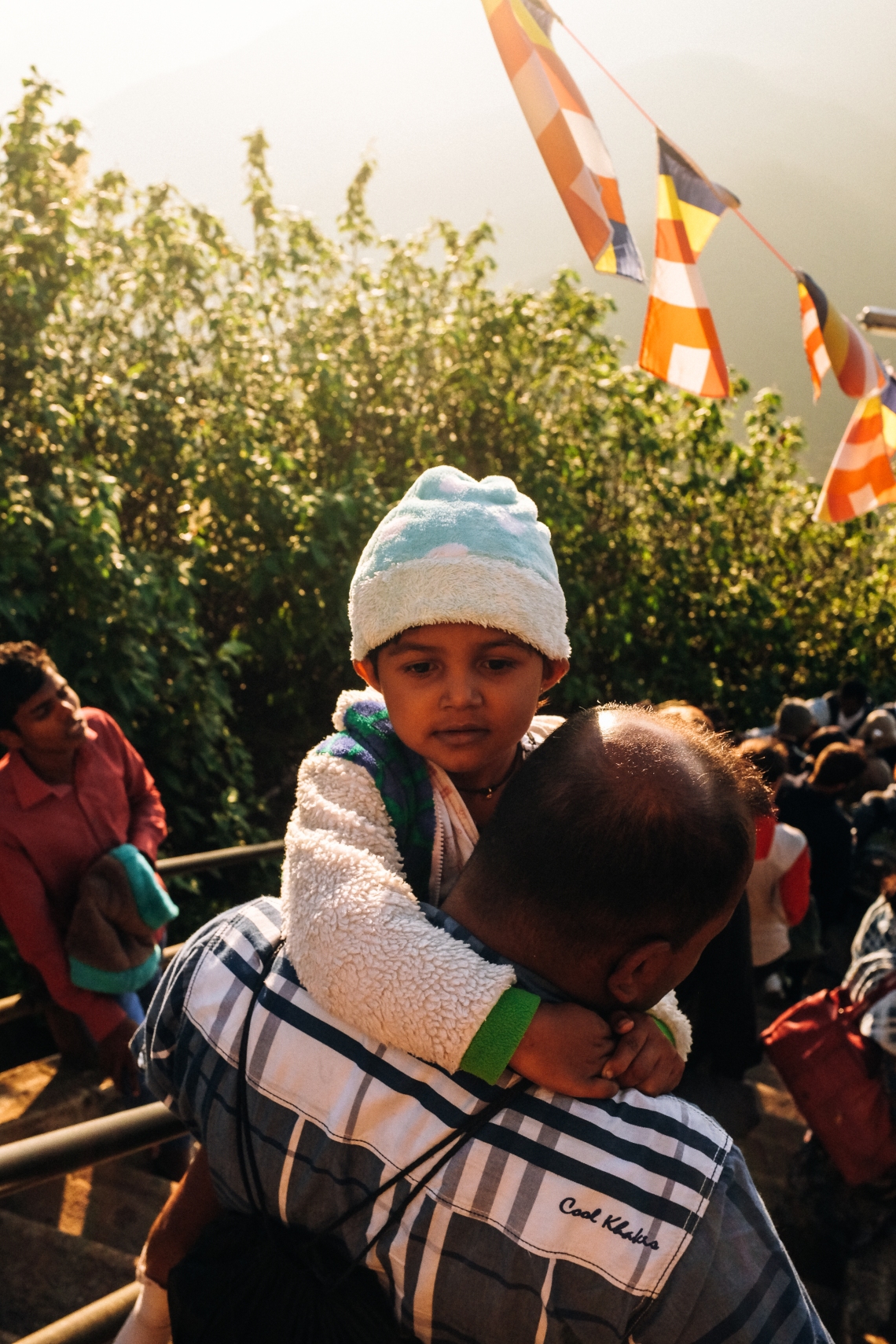 We came to a tea house and before I knew it Robbie had a sugary, red-hot tea in my hand giving me that extra bit of life I needed to complete the hike. I should probably be saying a huge thank you to Robbie at this point the little trooper, not only having to endure the physical side of the hike (which he seemed to breeze through) but also the emotional wailing of his dramatic girlfriend from behind.

There were moments when I doubted my calves, my will power and myself to step just one more time. That was until the path got thinner, the lines got a little longer and the air go so much colder. I regret smugly wondering why everyone was so wrapped up on the ascent as I sweated bucket loads, they were preparing for the whips of cold wind that greeted you at the top. 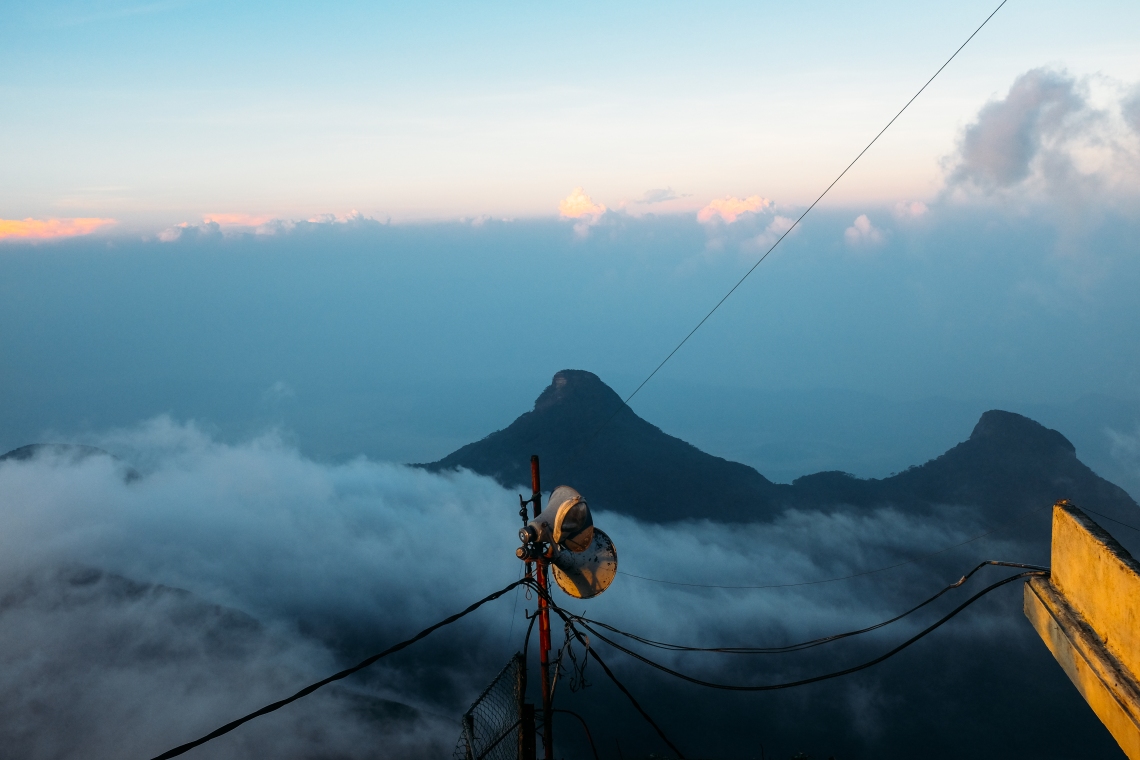 As soon as we reached the top a whole wave of relief swept over me, we had made it. It was still dark and I was definitely getting emotional. We walked round, rang the bell and kept the blood pumping round our bodies. We sat with a huge group of people on some steps, huddling to keep warm, layering up and eating the remains of our biscuit supply. We decided to walk round again and stand on the other side of the pagoda. We just happened to stand in the best spot for Sunrise.

Everyone started to congregate around us, using Robbie as my protective shield to ensure my photographs wouldn’t be affected, we waited. I didn’t quiet know what to expect, I had never really experienced a sunrise properly before, kind of always waking up as the sky is pink and thinking that was it. Then it happened, a murmur ran through the crowd and the smallest edge of the sun peeked over the mountain in the distance and the whole of Adams peak erupted, clapping, cheering, a band, yes a band started to play. The sun was rising and we were all excited. A perfect, round ball of fire rose higher and higher into the sky casting the most incredible colours over the land below, slowly illuminating all the shadows… it was possibly one of the most magical experiences of my life. 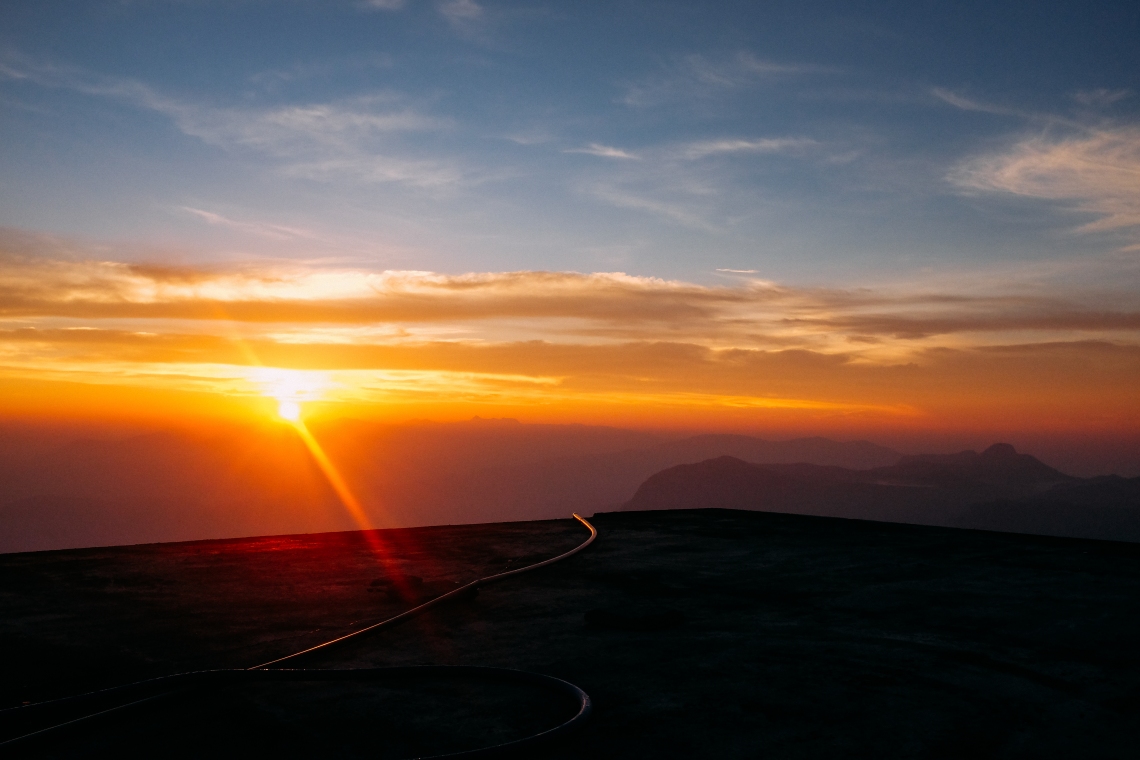 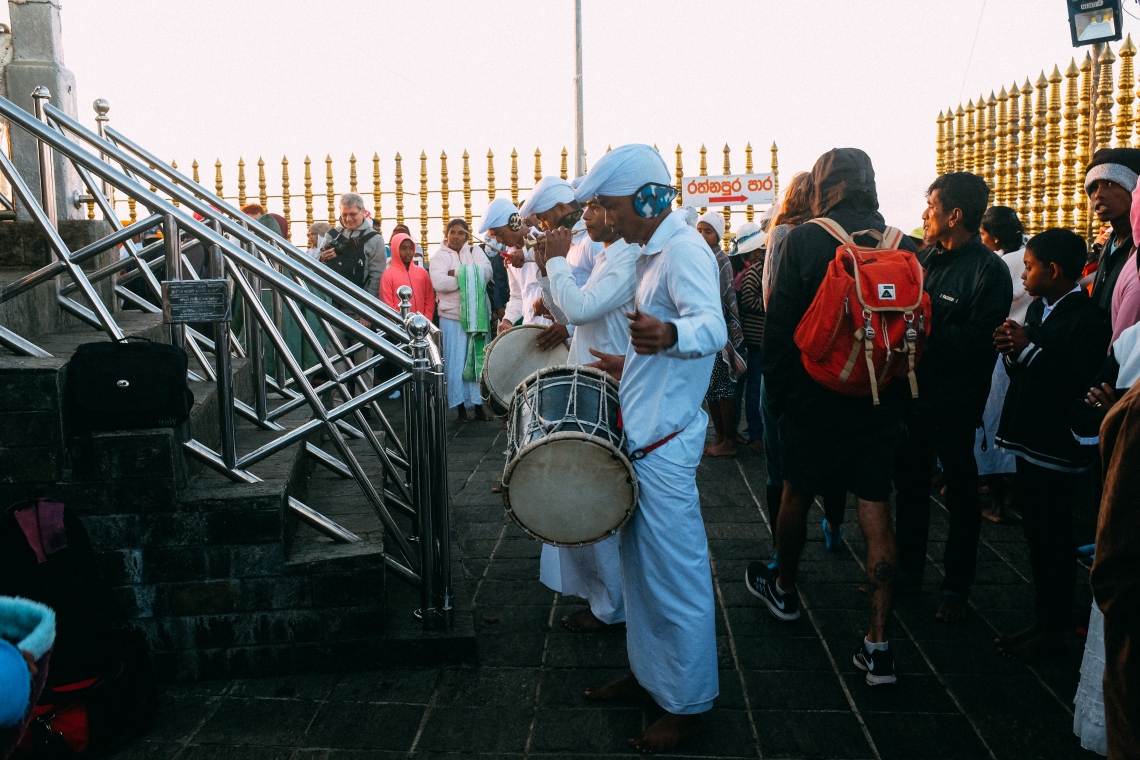 The people of Sri Lanka, the travellers, the keen hikers, everyone in that moment was experiencing and feeling the same thing. Buzzing with excitement and emotion, we let the crowds thin so I could take more photos, appreciate that view for a few seconds longer and then we decided to descend. The wind had started to pick up and I wasn’t getting any warmer standing still. We walked slowly down, one for the sake of my knee and two to soak in the views we missed on the ascent in the pitch black. It was breathtakingly beautiful. We walked down, a steady few hours it took, thanks to my camera and me. I just felt like I needed to capture every moment of this journey. As soon as we hit the bottom and had worked our way through the biggest pile of toast with the view of Adams peak against the bright blue sky and the early morning sun a sense of achievement washed over me. I will forever cherish that moment, those memories and I said quietly to myself that I hope we will still be hiking to special places when were 70 years old… 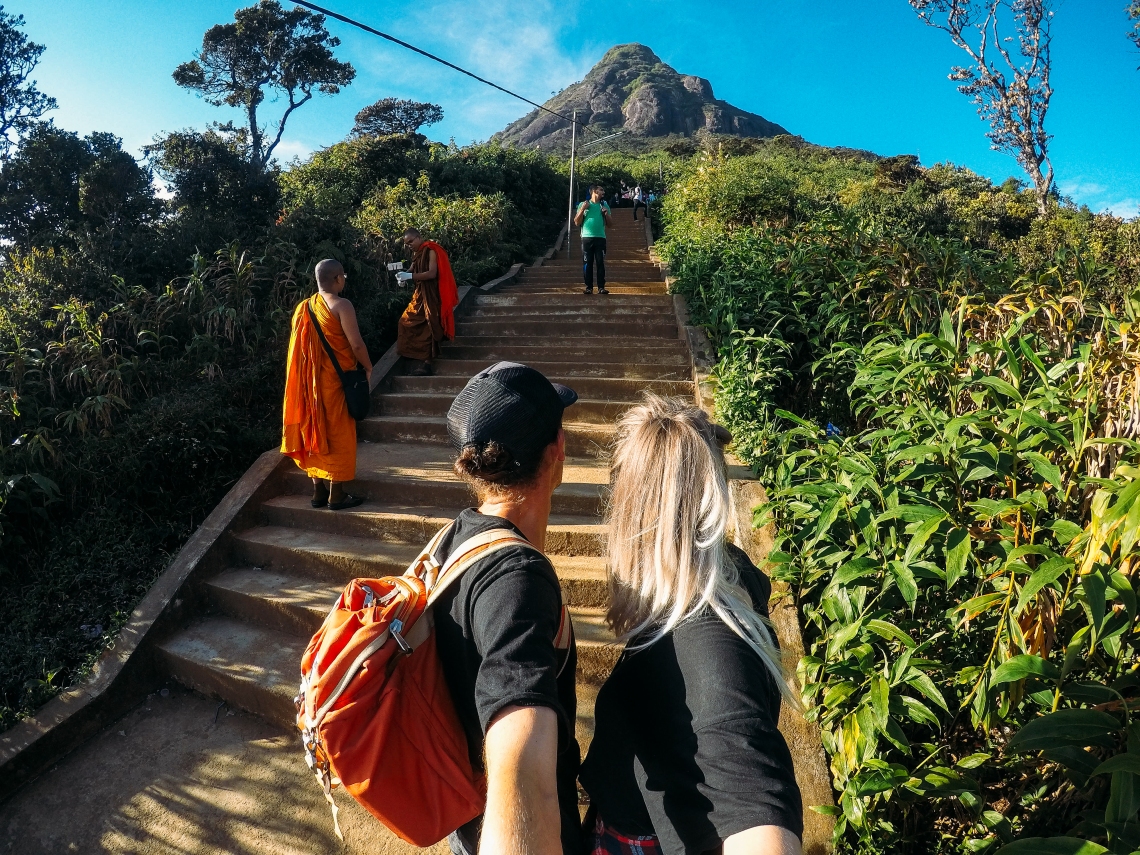 I may or may not of shed another tear at this point.

Disclaimer – my legs refused any functioning activity for the next two days however every inch on pain was worth it.