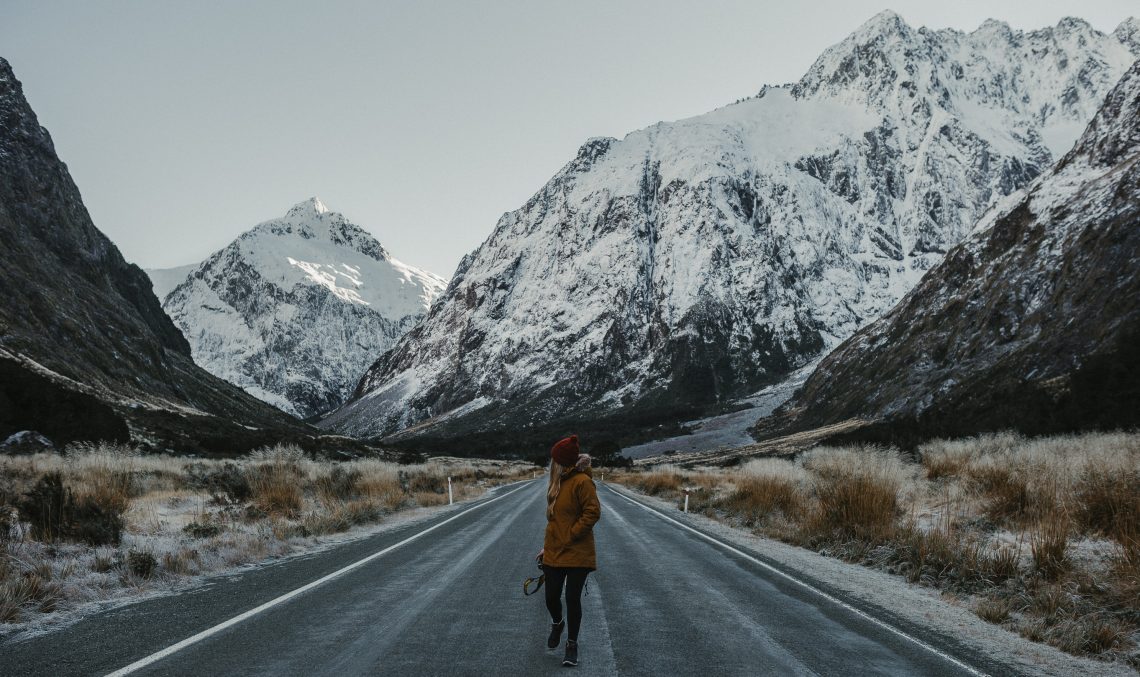 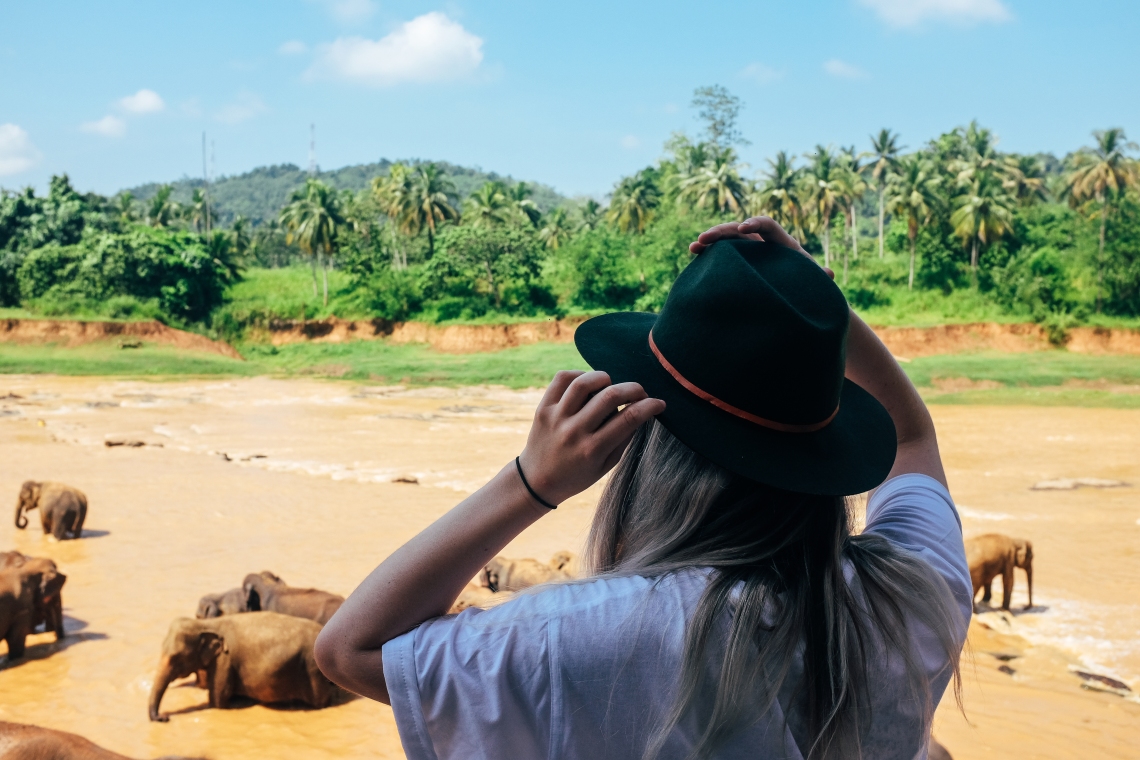 When I was Eight years old a relative of mine visited Sri Lanka. A country I had never heard of, the child in me could only imagine what a small Asian island in the middle of the ocean could be like. They showed me photographs and gifted me a wooden elephant from a place called Pinnawala. They told me the elephants walked down to the river alone as you stood and watched. Shop owners would pull down their shutters and you could buy paper made from Elephant poo. I have been obsessed with Elephants my whole life so since then it had a firm place on my bucket list… 17 years later I was stood on the same platform they once did, watching and listening to these majestic, beautiful animals. 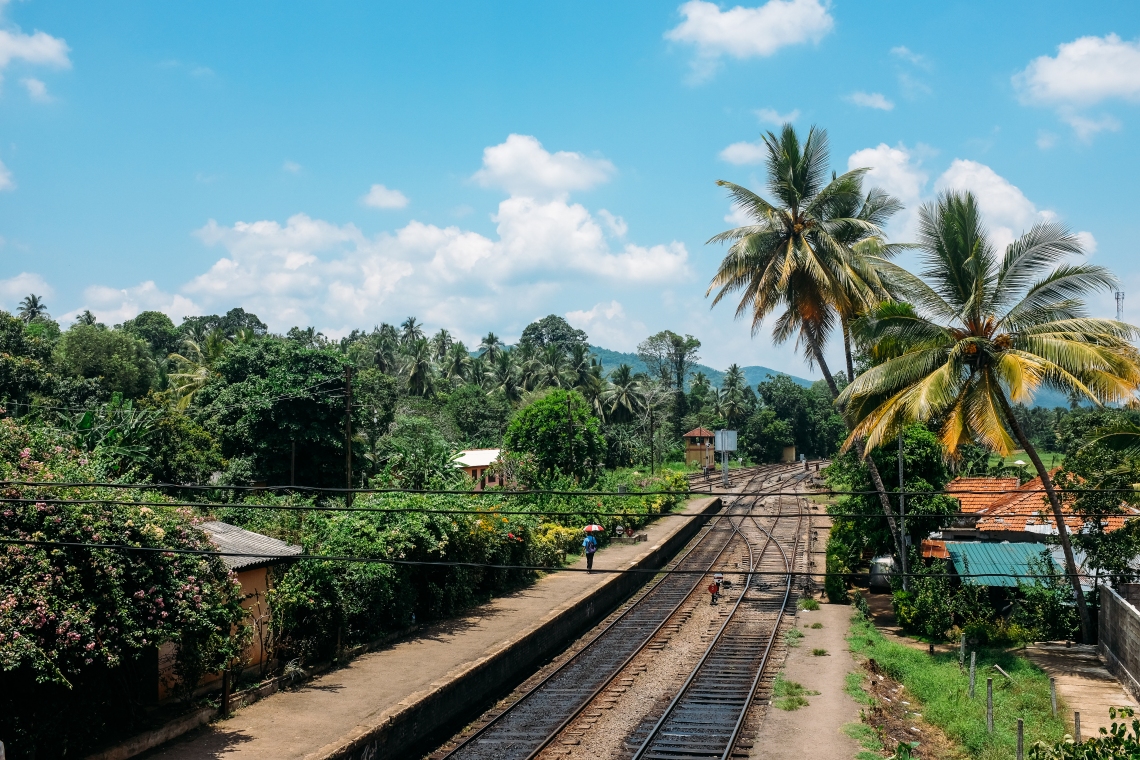 It was our third and final day in Kandy and we wanted to exploring somewhere out of the city. After once again declining a very expensive tour to a different Elephant place we jumped in the standard 300 Rupee Tuk Tuk to the train station. We grabbed some snacks from our friend who also happens to be a walking talking train timetable and jumped on the train just in time toward Rambukkana. It cost us 70 Rupees each and we found a window seat in second class. 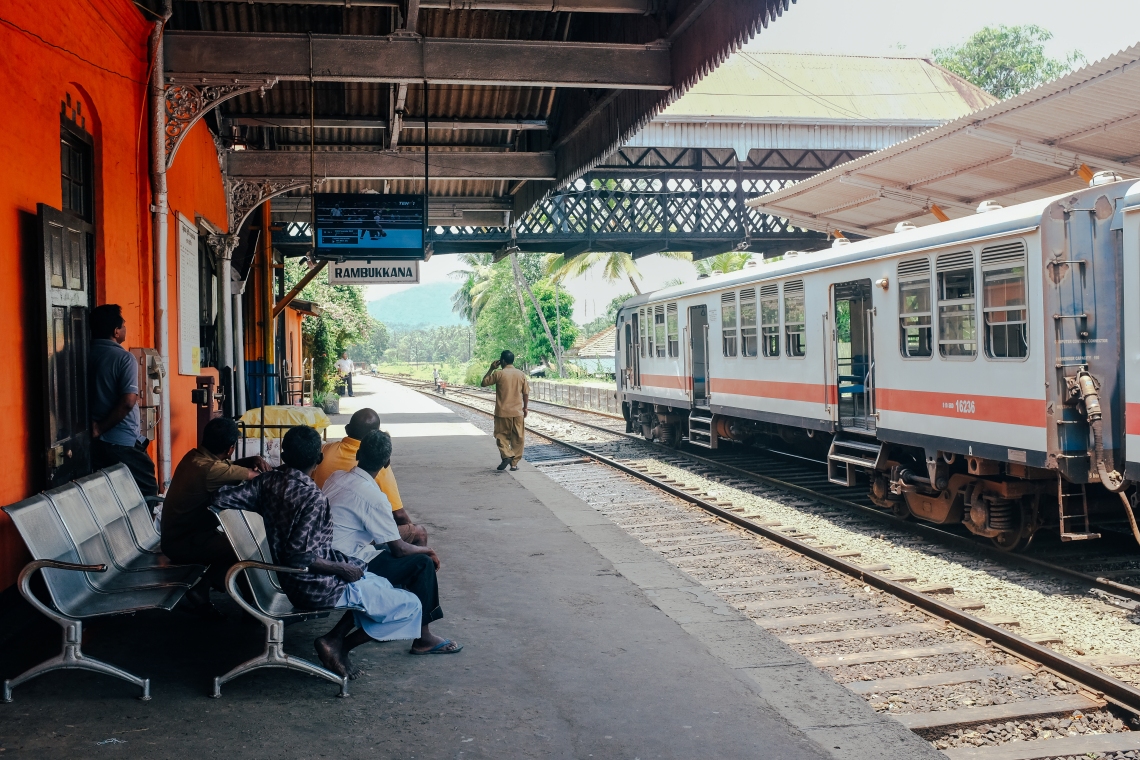 It was there we met Nathaniel, a 67-year-old preacher. He spoke to us for the duration of the journey wanting to know about our lives, our family, and the trip we were on. The conversation topics varied from snow to marriage to politics and photography. He educated us about God and how one day he had a dream that lead to the desire to speak to foreign tourists, he fully believed that God put him on the earth to do just that. He referred to our conversation as a divine meeting and one he will remember. He made sure we knew how to reach our final destination; we shook hands and parted ways. 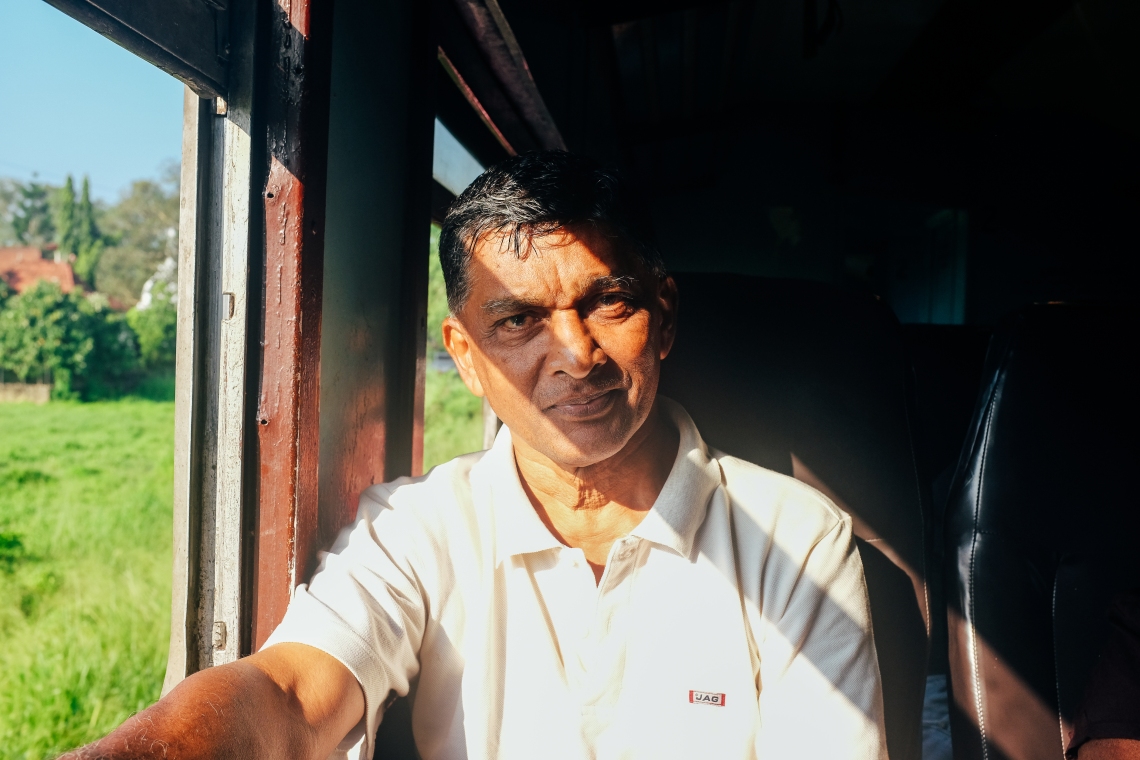 Another short Tuk Tuk ride to Pinnawala. The driver, the touts outside and the guys back at the hostel all tried to make us go to another Elephant place where you could ride, touch, bathe and feed the elephants. In terms of Elephant tourism and all the things we should be avoiding we declined and paid our entrance fee to Pinnawala.

The grounds were pretty empty, just some of the workers clearing up a huge piles of leaves mixed with elephant poop. We followed a school ground up the hill to the place where the elephants were hiding. 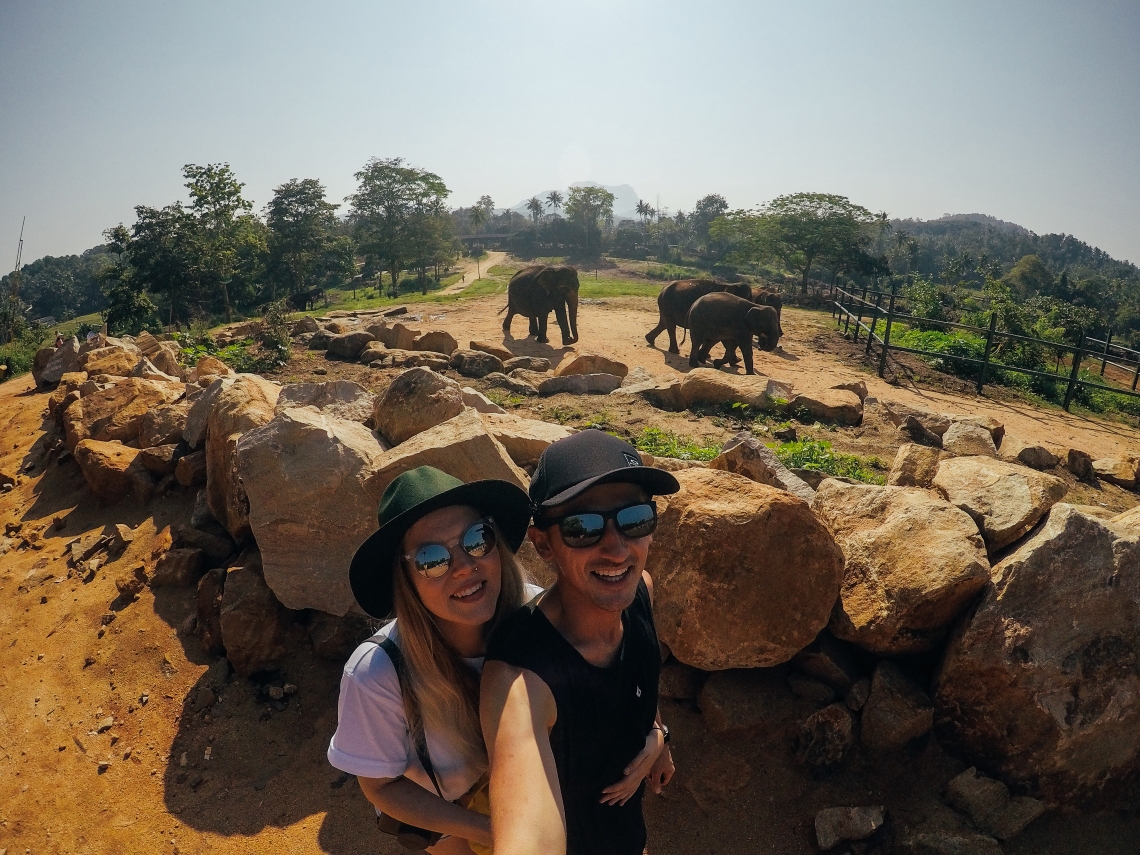 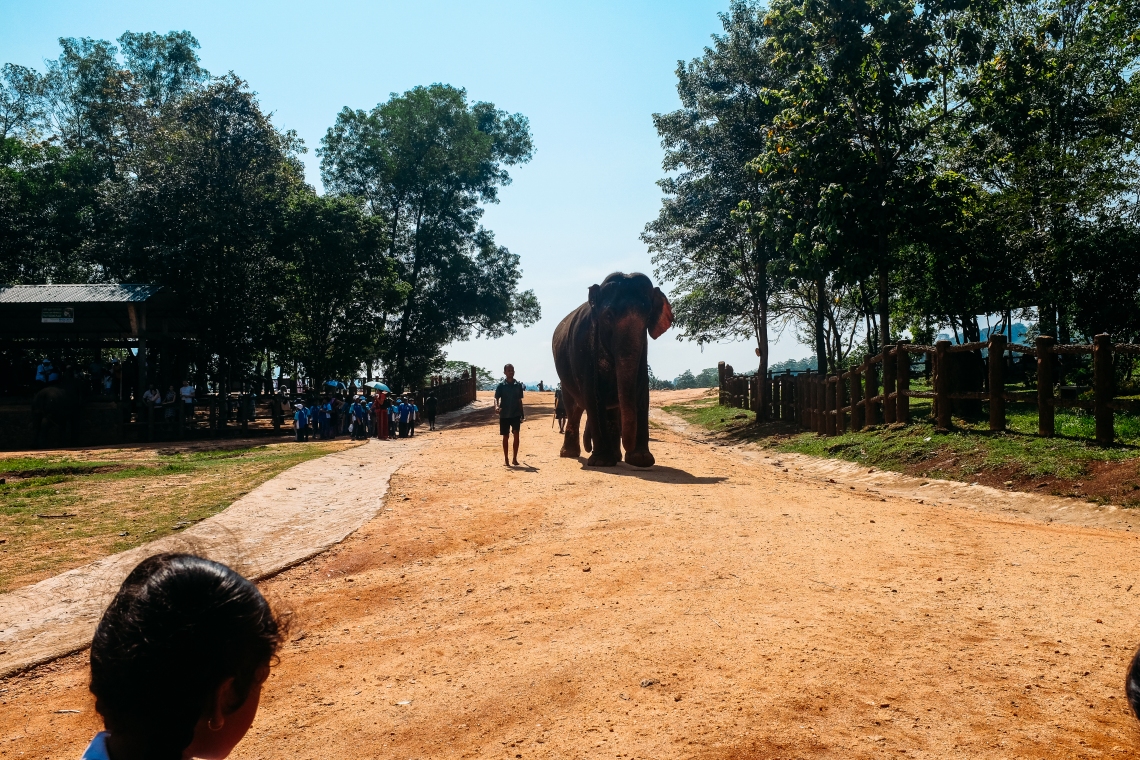 They were in a huge paddock, out of sight from the entranceway. It was super early but the sun had just started to beat down. I regrettably ran towards the elephants to only be covered in sweat a few seconds later. Nothing at this moment really mattered though, there was about 65 Elephants in front of me, eating, playing, throwing dust around and flapping those huge beautiful ears. We stood behind the rocks and watched them until I couldn’t take the heat any longer. The school groups had a viewing at the other end of the paddock where some baby elephants were getting bottle fed by the members of the staff. We walked over but the crowd was far too big and the children were a little to excitable for us so we slowly walked down to the river where you can watch the elephants bathe for the afternoon. 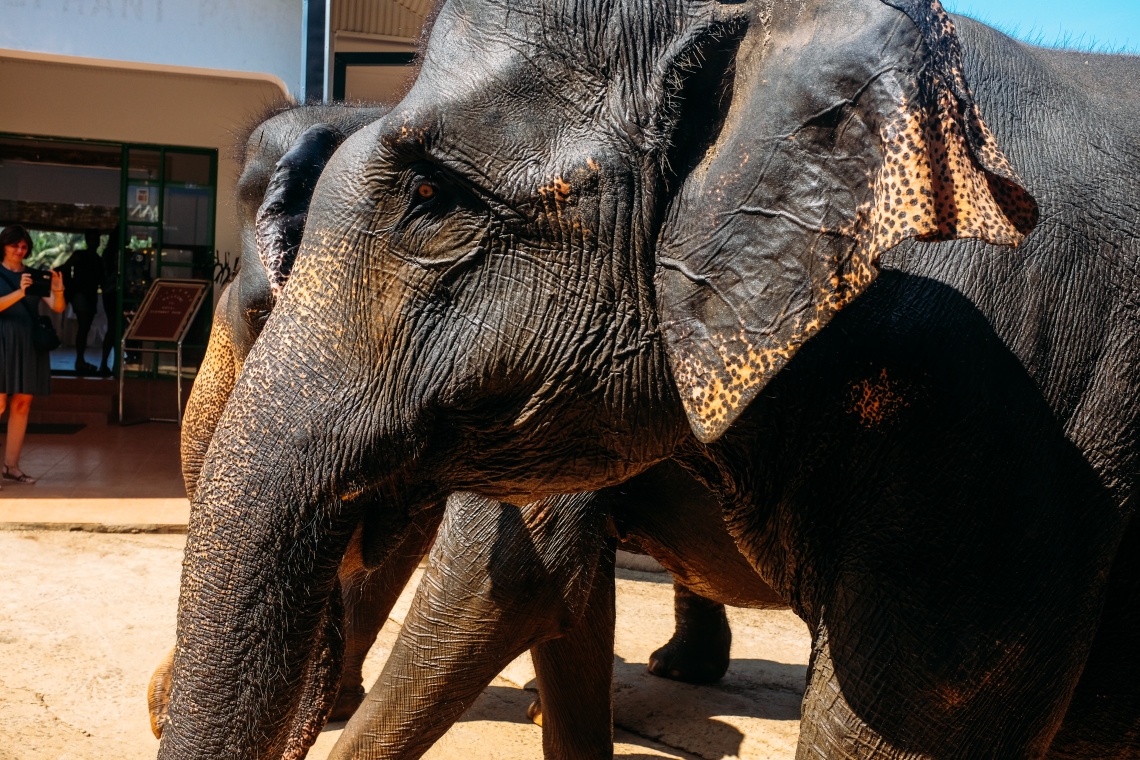 Just as we started to leave so did the rest of the group, not people no, I mean the Elephants. It was magical; they walked as a herd, trunks and tails swinging simultaneously. Resembling a somewhat loosely supervised school trip & that iconic Elephant scene from Jungle Book, they paraded their huge wrinkly bums down to the river. Shop owners hastily pulled down shutters and batted away roaming trunks with their hands. When they got to the river we took some time taking photos from the platform and then retreated to the fan cooled restaurant overlooking the water. It was pure bliss. The smile on my face was the biggest it had ever been and I couldn’t believe I was this close watching the Elephants frolic and play with each other. 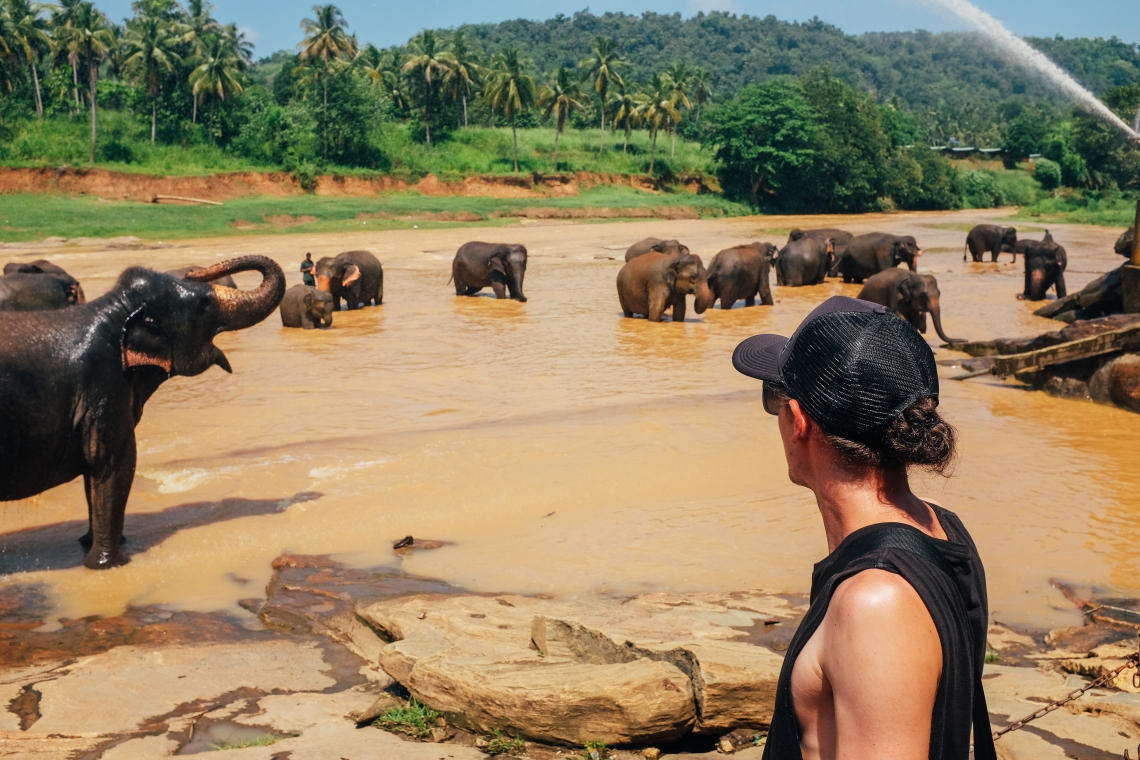 Around two hours later the Mahouts gathered up the naughty strays that had wandered further downstream and walked them back toward the group. Knowing it was near dinner time the Herd all packed together and made their way back up the street. Dodging the elephant poop we followed them and waved them back home. 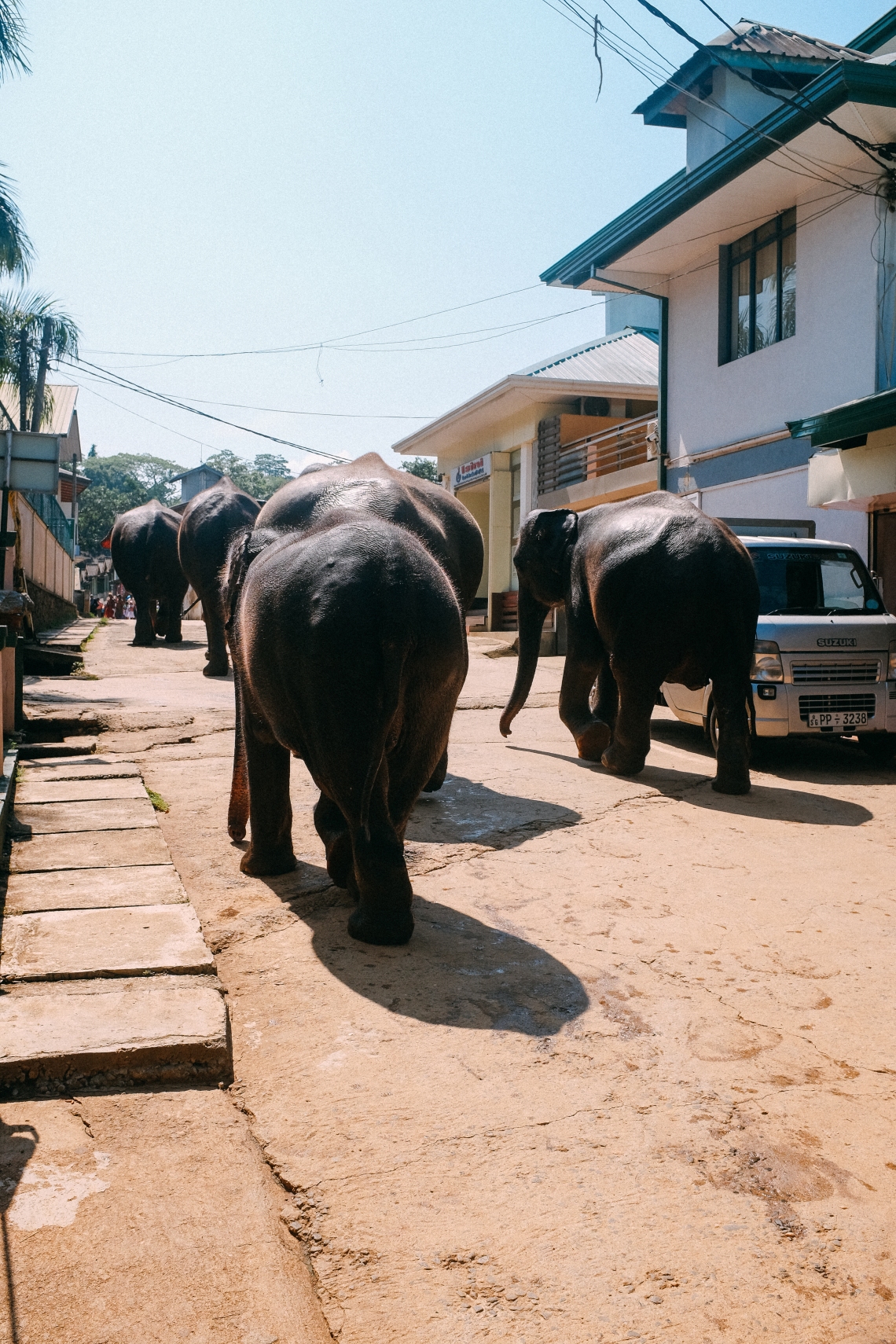 Down the road after indulging in a delicious Sri Lankan lunch and being told sternly I couldn’t take all the wooden elephants home we jumped back in a Tuk Tuk bound for the train station & Kandy. 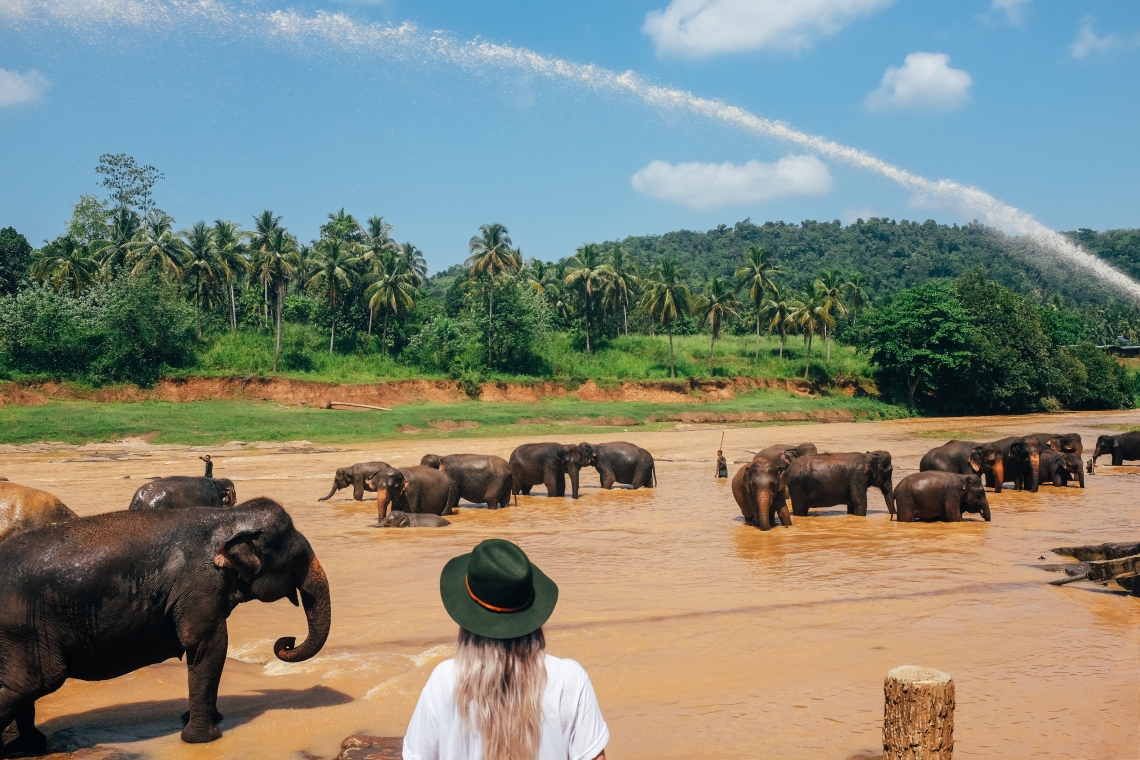 Elephant conservation and elephant tourism is rife in the media at the moment. I’m sure it was once on everybody’s bucket list to ride an Elephant, that was until the videos of how they are treated prior to Human interaction surfaced. I had done my research, spoke to locals and others who had visited to Pinnawala and they all assured me it wasn’t cruel. They don’t provide you with contact and for me it was a chance to see these beautiful creatures up close without feeling like I had to interact with them. The whole time we were at Pinnawala we saw two chains. One draped around an elephants neck to aid him as he walked. He was blind and the Mahouts touched the chain in the direction they wanted him to walk. The other was draped around the neck and loosely attached to the foot of a younger looking elephant, after some chatting and enquiring it turns out he was a runner and to protect him & the public during the walk to the river they have to slow down his walking, when he reached the river they took it off. I will never exploit an animal for my own pleasure, nor would I engage in any activity knowing that animal could be under stress. What I saw at Pinnawala warmed my heart. A conservation area for these magical creatures, allowing them to roam free around the grounds, down to the river and back to the feeding ground. The Mahouts were caring, played with the elephants and provided a safe viewing environment for us. I understand that people have strong views about any kind of animal encounters but for me this one was pretty safe and I walked away feeling content after seeing how happy they were. 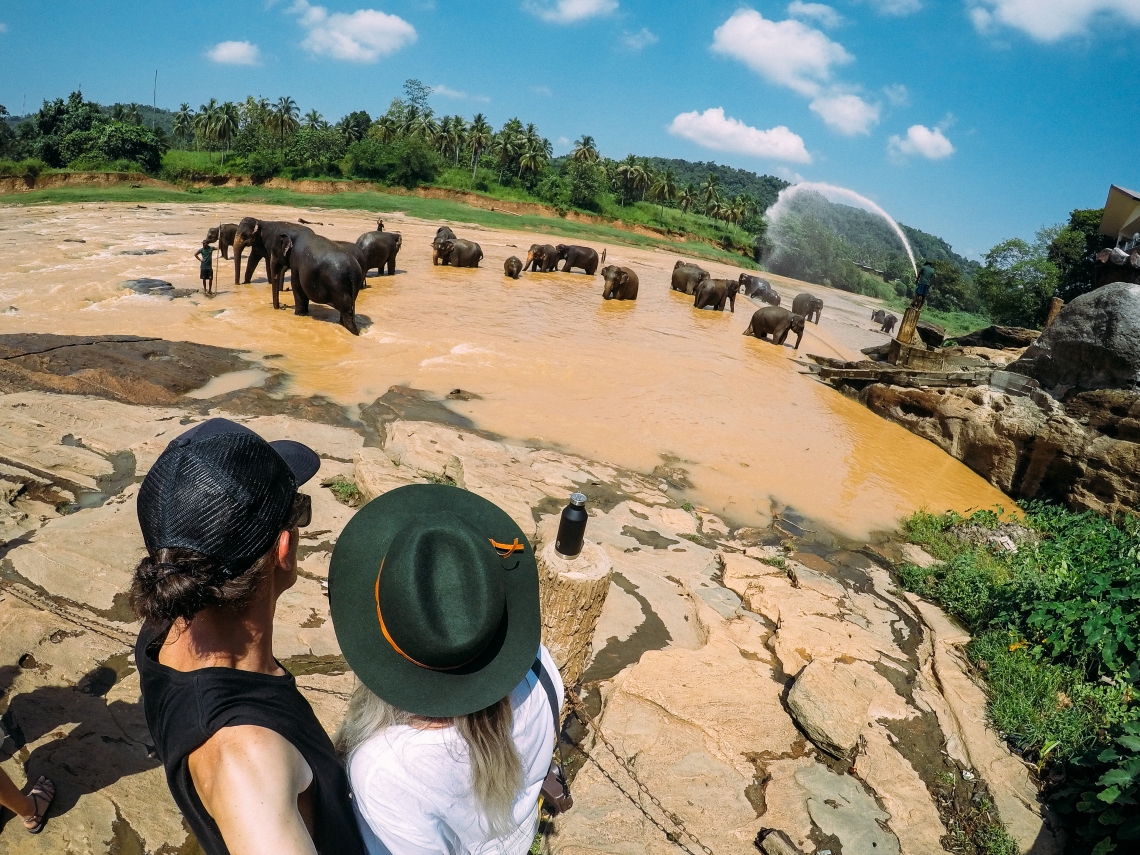